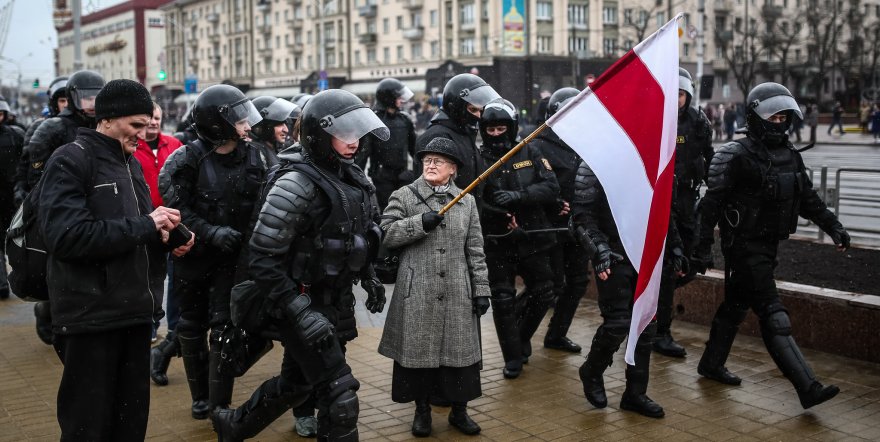 Western officials and the news media have for years routinely described President Aleksandr G. Lukashenko of Belarus as “the last dictator of Europe.”

So it may have been jarring for some to hear him expressing deep support for human rights, democracy and the rule of law in an address last month to a large group of United States and European lawmakers who came for a conference to Minsk, the country’s tidy, but utterly uniform, capital.

For Mr. Lukashenko, however, the performance was old hat.

Over two decades, he has perfected the art of playing Russia and the West against each other. Belarus has been both an indispensable ally and ward of the Kremlin, depending on Russian subsidies to keep its economy afloat, and an important buffer for the West against the Kremlin’s growing military aggressiveness.

But with major Russian military exercises scheduled for next month in Belarus, opposition leaders, analysts and even the American military fear that Mr. Lukashenko’s tightrope act may be coming to a close.

There are widespread fears in Minsk that when Russian servicemen come to Belarus for the war games, known as Zapad, Russian for “West,” they will never leave. Intensifying those concerns are official reports that Russia has rented 4,162 railway cars to transport only 3,000 soldiers and no more than 680 articles of military equipment to Belarus.

The troops started to move into the country in late July, with the exercises scheduled for Both the Russian and Belarussian authorities have vowed publicly that the troops will return home after the exercise.

Over the years, as Mr. Lukashenko has sought to demonstrate his independence, he has periodically picked fights with Russia’s president, Vladimir V. Putin — stage-managed affairs that have been quickly patched up in highly public displays of Slavic brotherhood.

With living standards declining, Belarussians took to the streets at the end of March in the biggest wave of antigovernment protests in years. Credit Siarhei Hudzilin for The New York Times

As Moscow’s relations with the West have plunged to levels last seen during Soviet times, however, Mr. Lukashenko’s balancing act has grown increasingly untenable. The time may be approaching when he will have to choose between the two camps, a decision that carries decided risks.

An overt move to embrace the West could provoke a reaction from the Kremlin, as happened in Ukraine after the ouster of President Viktor F. Yanukovych. The West almost certainly would not oppose such a move militarily.

But a complete embrace of Russia would collapse Belarus’s sovereignty and could renew the street demonstrations that erupted this year among a population already seething over declining living standards.

Most analysts assume that Mr. Lukashenko, if forced to choose, will throw his lot in with his patrons in Moscow.

“Belarus can build many bridges to the West, but it cannot cross any of them,” said Artyom Shraibman, referring to a well-known formula to describe the relationship between the two, as he sat in the modern newsroom of Tut.by, the country’s leading independent news website, where he is a political editor. “The European vector is just a way to balance the relationship with Russia.”

A landlocked country squeezed by Russia, Ukraine and three NATO states — Poland, Latvia and Lithuania — Belarus has historically served as an invasion corridor for the major powers. During the Cold War, the Soviet Union maintained several major military bases there, which included nuclear-tipped missiles.

In 2015, Belarus rebuffed a Kremlin request for permission to establish a military base. But analysts wonder how long Mr. Lukashenko can continue to resist in the face of strong Russian pressure.

“For the Kremlin, it is very important to have its own troops here to have the ability to escalate the situation in the region at any time,” said Arsen Sivitski, director of the Center for Strategic and Foreign Policy Studies, a Minsk-based research group. “For Belarus, it is important to restrain the Kremlin. Otherwise, Minsk would have no strategic value for Europe.”

But, he added, “the Kremlin has the ability to break this game at any time.”

Since it gained independence in 1991, Belarus has survived in large part on heavy subsidies from Moscow in what a local economist, Sergei Chaly, called an “oil for kisses” scheme.

“Mr. Lukashenko has fulfilled an important historic mission,” Mr. Chaly said. “He came up with the best system for how a post-Soviet state can deal with Russia.”

Minsk was permitted to purchase Siberian oil at a low price, process it at its two refineries, then sell it in the West at market prices, pocketing the difference.

Various estimates put the overall Russian subsidy at more than $50 billion over the past two decades. Mr. Lukashenko used the money to prop up his so-called zombie factories, hopelessly outdated and decrepit industrial enterprises that allowed him to boast that he was the only post-Soviet leader who kept industry afloat.

In return for the subsidies, Mr. Lukashenko pledged brotherly unity, allowing Mr. Putin to show that he has allies beyond Russia’s borders. The relationship grew testy in 2014, however, when Minsk stopped short of officially recognizing Crimea as a part of Russia. Then, a year later, there was the standoff over Russia’s request for a military base.

President Aleksandr G. Lukashenko of Belarus in July. His position between the West and Moscow is a tenuous one. Credit Tatyana Zenkovich/Agence France-Presse — Getty Images

Fed up, the Kremlin retaliated by raising natural gas prices. When Mr. Lukashenko refused to pay them, Moscow dismissed any concern about driving Belarus into the Western camp and cut the supply of oil, leaving the Belarussian economy high and dry.

“The Kremlin understands well that with all his flirtations with the West, Mr. Lukashenko is still a dictator and cannot move Belarus into another geopolitical space,” said Pavel Usov, director of the Center for Political Analysis and Prognosis. “The dependency is so strong that Russia can manipulate any political process and event in Belarus.”

Sometimes, this dependency manifests itself in odd ways.

After Russia banned imports of Western food in retaliation for sanctions imposed over Crimea and the Ukraine crisis, for example, Belarus turned into a hub for Italian Parmesan and Polish apples. The products were relabeled as Belarussian and appeared on store shelves throughout Russia.

Exports of “Belarussian” apples to Russia jumped 50 percent last year, whereas local production remained steady. Belarus, a country with severe winters, became the origin of such tropical species as pineapples, mandarin oranges and kiwi fruit, and also the butt of much sarcasm.

This scheme still could not generate enough income, though, and with help from Russia shrinking, the economy of Belarus contracted for the second year in a row in 2016. In June, Belarus had to borrow $1.4 billion on the European market, and it is negotiating $3 billion more from the International Monetary Fund.

Salaries have dropped by more than 13 percent over the past two years and the country’s finances have soured, forcing the government to introduce one of the more remarkable tax laws in the world: a requirement that people who are not employed full time pay $240 a year as “compensation” for lost taxes.

With living standards declining, ordinary people took to the streets at the end of March to take part in the biggest wave of antigovernment protests in years.

The riot police arrested more than 700 people in Minsk and across the country during an opposition rally in March. Credit Siarhei Hudzilin for The New York Times

“He will lead this situation to what had happened in Ukraine,” said Aleksandr Konches, a pensioner and one of the protesters. “Look at who came out — pensioners, workers, simple people.”

However, many local people said that even if Mr. Lukashenko were ousted amid antigovernment protests, they doubted the country would turn against Russia.

Viktor V. Bocharenko has spent his whole life in Redzki, a picturesque village of 150 people on the border with Russia. After heading a local collective farm for 13 years, he now leads the life of a simple retiree, growing potatoes and sometimes selling a sack at a healthy markup in the Russian region of Smolensk.

Viktor V. Bocharenko in Redzki, a village on the border with Russia. “What happened between Russia and Ukraine will never happen between us,” he said. Credit Siarhei Hudzilin for The New York Times

Mr. Bocharenko, 65, said he sees little evidence of the stricter border controls Moscow said it was imposing in an attempt to reduce the transshipment of Western food. “They just look into my car and let me go,” he said.

He added, “What happened between Russia and Ukraine will never happen between us.”