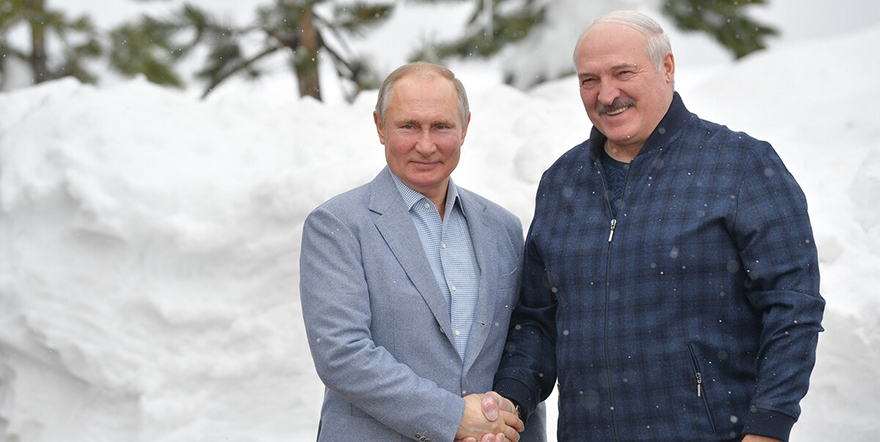 They went skiing. They rode snowmobiles. And they lauded their “strategic partnership and alliance,” pledging to deepen integration between their two countries.

But after Kremlin leader Vladimir Putin and Belarusian strongman Alyaksandr Lukashenka met for six hours in the Black Sea resort of Sochi on February 22 and spoke again by telephone the next day, it remained unclear where this troubled and often dysfunctional relationship between Europe’s last two dictators actually stands.

According to a confidential unpublished report by the Minsk-based Center for Strategic and Foreign Policy Studies, the summit “did not yield significant practical results.” But that does not mean there is nothing to see here. In fact, quite the contrary.

The dynamic between Putin and Lukashenka, two men who reportedly despise each other on a personal level, is extremely fluid, turbulent, and opaque. But Russia’s geopolitical goals in Belarus remain constant and Moscow will continue to pursue them, with or without Lukashenka.

Belarus occupies a central place in Russian strategic thinking and is an essential part of what Moscow considers “strategic depth,” that is, the existence of dependent satellite buffer states on its western border ruled by pliant Kremlin clients. Putin has also long sought unfettered access to Belarusian territory as a military platform, which would bring Russian power right up to the borders of NATO members Poland, Lithuania, and Latvia.

This is what Putin cares about. The rest is just details. Given this, there are two key issues to keep an eye on in the aftermath of the Sochi summit.

The first question is whether Putin will finally get his military base in Belarus.

The issue of military bases was an important item on the summit agenda in Sochi. Russia is currently seeking to extend its lease on two existing military facilities, an early-warning missile detection system in Baranavichy in Western Belarus and a Russian naval communications center in Viliejka in the Minsk region.

In 1995, the two countries signed a 25-year lease giving Russia access to the facilities that Moscow is now seeking to renew for another quarter century. According to the Center for Strategic and Foreign Policy Studies confidential unpublished report, the two facilities’ military usefulness is limited as Russia now has similar facilities on its own territory. Their real significance, the report states, is political, as they showcase Moscow’s “intention to consolidate Belarus in the Russian sphere of influence for decades to come.”

The discussion about the missile detection system in Baranovichi and the naval communications center in Viliejka also appear to be a stand-in for the real issue, namely Putin’s long quest for a new permanent Russian airbase on Belarusian territory.

The base would be located in Babruysk, in eastern Belarus, and would station SU-27 fighter jets manned by Russian pilots. This is something the Kremlin has been actively seeking since 2015 and Lukashenka had, until recently, been steadfastly resisting.

The questions before us now are: Has Lukashenka been so weakened by six months of protests, international condemnation, and isolation that he now has no choice but to give Putin what he wants? And if Lukashenka doesn’t acquiesce, how far will the Kremlin leader go to achieve his objective? 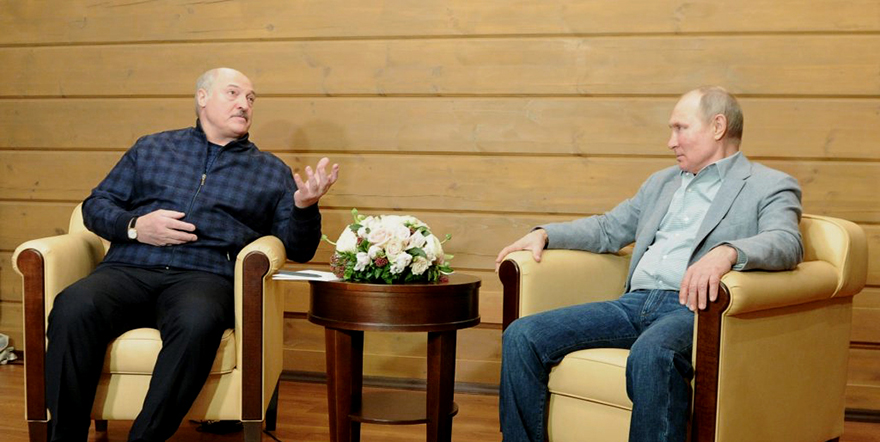 The second big issue on the Russia-Belarus agenda is whether regime change is likely in Minsk.

Given the complex relationship between Lukashenka and Putin, all eyes were on the optics and tone of their interaction in Sochi. Lukashenka was overtly deferential. He referred to Russia as Belarus’s “older brother,” and dutifully took notes when Putin spoke.

Putin did offer Lukashenka a USD 1.5 billion loan, which would be used to restructure Belarusian debts to Russia. But the Kremlin leader often appeared bored during the public portion of the meeting.

In December, The Insider published allegedly leaked Kremlin documents outlining a policy of forcing Lukashenka into constitutional changes that would establish a parliamentary republic in Belarus. Moscow would then seek to establish pro-Russian political parties along with accompanying information resources including traditional media, YouTube channels, and Telegram channels, in order to assure Moscow’s control of the newly empowered Belarusian parliament.

Arsen Sivitsly, director of the Minsk-based Center for Strategic and Foreign Policy Studies, says the Kremlin appears to be considering what he calls an “Armenian scenario,” a reference to Moscow’s acquiescence in that country’s 2018 democratic revolution.

Sivitski told me the Kremlin is increasingly willing to tolerate democratic leaders in neighboring post-Soviet states as long as they remain in Moscow’s sphere of influence. In Belarus, Sivitski said Moscow believes it can achieve its geopolitical goals through an increased military presence and constitutional reforms that would give Russia effective control through pro-Kremlin parties.

The fluid political dynamics between Russia and Belarus are highly consequential. The Kremlin’s machinations threaten to hijack what has been a genuine democratic uprising in Belarus. They could also change the security dynamic on NATO’s eastern flank.

Brian Whitmore is a Nonresident Senior Fellow at The Atlantic Council’s Eurasia Center, an Adjunct Assistant Professor at The University of Texas at Arlington, and host of The Power Vertical Podcast.