Lukashenka Agrees to Joint Air Patrols and Training Centers With Russia, but Still Opposes Military Base 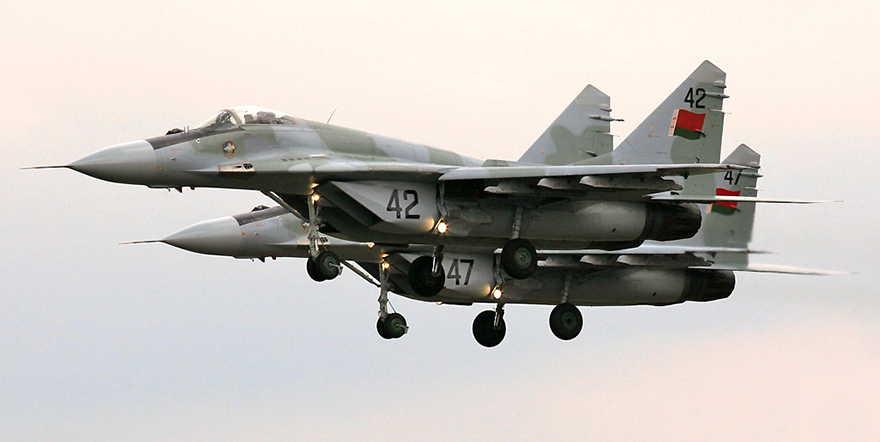 The air forces of Russia and Belarus will begin joint air-defense missions out of one of the Belarusian airfields this summer. In reaching this agreement, Minsk and Moscow are resuming the practice of joint fighter jet patrols first started in 2013 but suspended two years later. The timing and broader circumstances of this sudden recommencement of such operations appear to signal a renewal of the Kremlin’s intentions to establish a permanent military presence in Belarus in the medium term.

According to the commander of the Belarusian Air Force and Air-Defense Forces, Major General Igor Golub, these joint missions with Russia are stipulated by the action plan (agreed to at the end of 2020) for on-duty air-defense forces within the framework of the Russo-Belarusian Unified Regional Air-Defense System (URADS) (Interfax, April 15). Although he avoided going into details when it comes to the reasons and parameters of the associated Russian Air Force’s deployment to Belarus, the experience from 2013–2015 provides some insight into what their likely activities this time will also consist of.

In 2009, Minsk and Moscow signed the agreement “on Joint Protection of the External Border of the Union State in Airspace and the Creation of the Unified Regional Air-Defense System of the Republic of Belarus and the Russian Federation.” However, that document only came into force in 2013, and two sides agreed on joint airspace patrolling missions solely on a rotational basis. Yet Moscow kept pushing. Soon, Russian Defense Minister Sergei Shoigu announced the creation of a Russian airbase in Baranovichi, Belarus, before then end of 2013, with a deployment of one fighter aircraft regiment by 2015. President Alyaksandr Lukashenka publicly denied the Moscow official’s words, emphasizing that the key issue under consideration was not one of creating an airbase but of supplying Russian aircraft to the Armed Forces of Belarus (Kommersant, April 29, 2013).

Nonetheless, in December 2013, four Russian Su-27P fighter aircraft landed at the 61st military airbase of the Belarusian Air Force, in Baranovichi, in order to take part in joint airspace patrolling missions (Tut.by, December 9, 2013). It was, to some extent, a response to the North Atlantic Treaty Organization’s (NATO) Baltic Air Policing mission, which protects the airspace of the three Baltic States of Estonia, Latvia and Lithuania. Moreover, Minsk’s decision to go ahead with the joint air patrols occurred amidst strained relations with Western countries—as a far-reaching echo of the December 2010 presidential elections, which were heavily criticized by most governments in Europe and the United States. Finally, and equally significantly, Moscow did not raise the issue of a Russian military base again until 2015, at which point the joint air patrols ended.

In September 2015, the Kremlin unilaterally announced that it had formalized plans to deploy a Russian military airbase with direct subordination to Moscow on Belarusian territory without Minsk’s prior consent (Pravo.gov.ru, September 7, 2015). President Lukashenka swiftly and firmly rebuked the overture, emphasizing that there were no relevant geopolitical or military-technical motivations for such a step (see EDM, October 7, 2015). The Belarusian leadership also abandoned the practice of joint air patrols with Russia in order not to escalate regional tensions, particularly in light of the ongoing Russian-Ukrainian conflict (Bellingcat.com, October 1, 2016). These decisions helped Minsk present itself as a neutral negotiating venue on the Russia-Ukraine conflict, formulate security guarantees toward all neighboring states, as well as normalize relations with the West, all while preserving and expanding Belarus’s strategic autonomy within its alliance with Russia (see Jamestown.org, March 2, 2020).

Nevertheless, Lukashenka’s repeatedly stated refusal to host a Russian military base did not stop the Kremlin. In November 2015, General Alexander Lyapkin, the chief of the Operations Directorate of the Main Staff of the Russian Air Force, declared that the staff and organizational structure of the anticipated Russian airbase had already been approved, and he appealed to the Belarusian side to speed up all necessary procedures to prepare the agreement for signing. According to him, Russian plans were to maintain one fighter squadron (12 Su-27 combat aircraft) and one rotary wing (4 Mi-8 transport-combat helicopters) at the airfield in Bobruisk (RIA Novosti, November 24, 2015). But still, Lukashenka’s government held firm for the next five years (see EDM, October 20, 2020 and October 28, 2020).

The political crisis that erupted as a result of the August 2020 Belarusian presidential elections sharply reversed these trends in Minsk, resulting in a significant aggravation of relations with the West and Belarus’s increasing dependence on Russian economic, political, and security assistance. The Kremlin has exploited Belarus’s sudden return to isolation from its European neighbors in order to expand Russian influence over its vulnerable ally.

In addition to restarting joint air-patrol missions beginning this summer (see Part One), Belarus and Russia have agreed to establish three shared combat-training centers within the framework of the bilateral Strategic Partnership Program for 2021–2025 (BelTA, March 16). One of these facilities, a joint combat training center of the Air Force and Air-Defense Forces, will be located on the territory of Belarus, in Grodno region. Its main purpose will be the instruction of Su-30SM aircraft crews, the training of Belarusian specialists to operate modern anti-aircraft missile systems that are in service with the Russian Armed Forces, as well as joint execution of combat training tasks. Russia will host the other two combat training centers—in Nizhny Novgorod and Kaliningrad oblasts (Mil.ru, March 5).

The Nizhny Novgorod joint ground forces training center will prepare and exercise the two states’ motorized rifle and tank units using modern methods based on the combat experience of the Russian Armed Forces. The authorities anticipate that the joint training will make it possible to work out tighter and more effective interaction between units making up the Regional Group of Forces of Belarus and Russia (which includes all Belarusian ground and special forces as well as the Russian 1st Guards Tank Army).

In turn, the joint combat training center in Kaliningrad region will be connected to the Russian Baltic Fleet and train Belarusian Armed Forces units alongside Russian Naval Infantry equipped with BTR-82As (this wheeled armored personnel carrier is supposed to be delivered to Belarusian military units in 2021). Additionally, specialized Belarusian units will receive advanced dive training at this center (Mil.by, March 16).

Both initiatives—the renewal of joint air-patrol missions and the creation of a joint Air Force and Air-Defense Forces combat training center in Grodno oblast—envisage a limited rotational presence of Russian Su-30 fighter jets and crews (four to eight) in Belarus. But crucially, upon arrival, those Russian personnel will come under the command and control of the Belarusian side. Like in 2013, however, the Kremlin may not be satisfied with this agreed-upon arrangement for long, and could eventually renew its calls for establishing a Russian airbase inside Belarus.

In the meantime, Minsk is trying to secure the provision of modern Russian aircraft on preferential terms or for free while preserving its strategic autonomy vis-à-vis Russia in light of the decreasing capabilities of the Belarusian Air Force (Bsblog.info, June 28, 2017). Although Lukashenka is generally careful to demonstrate his geopolitical loyalty to Moscow, by seeking to boost domestic air-defense capabilities he also wants to undermine one of Russia’s main arguments for why it purportedly needs to establish an airbase in Belarus. Indeed, following his April 22 meeting with Russian President Vladimir Putin, Lukashenka reiterated that there are no military-strategic or political reasons for establishing such a Russian airbase. As he pointed out, Russian jets out of Smolensk region can reach the major Belarusian military airfield in Bobruisk within three minutes. Also, he contended, the creation of a permanent Russian airbase inside Belarus would be a gift for his political opponents and trigger another round of protests. Lukashenka asserted that the Collective Security Treaty Organization (CSTO) and Regional Group of Forces’ mechanisms are sufficient to protect Belarus in case of foreign aggression (Belta.by, April 24). And in such a hypothetical case, Belarus would formally request military assistance from Russia, which would then deploy troops to Belarusian territory.

As noted above, the Russian side’s justification for expanding its military presence in Belarus has been the latter’s inability to independently guarantee the reliable protection of its portion of the airspace of the Russia-Belarus Union State. But of course, from the geopolitical point of view, stationing troops on the ground is the most effective means of securing Belarus within the Russian sphere of influence. Therefore, it is highly unlikely Moscow will ever accept Lukashenka’s arguments for why a permanent Russian base in unnecessary—particularly amidst his vulnerability at home and isolation from the West.

According to assessments of the Russian Academy of Military Sciences, the Belarusian Air Force requires at least three combat-ready fighter squadrons—that is, a minimum of 36 jets—to be able to defend their airspace. At the same time, it bears noting that 100 percent combat readiness is rare, since some aircraft are almost always undergoing repairs, modernization, etc. So in fact, the Air Force should have more than 36 fighters—tentatively at least 50—and a similar number of pilots (Bsblog.info, June 28, 2017). When Russia first raised the issue of the military airbase, the Belarusian Air Force had about 150 airplanes and helicopters of various types, most of which have almost reached the end of their service life, are obsolete or in storage (Bsblog.info, June 14, 2016):

In order to reduce the intensity of Moscow’s criticism of the combat capabilities of the Belarusian Air Force as well as Kremlin pressure, the Belarusian leadership decided to buy 12 Russian Su-30SM fighters for $600 million in 2017, to substitute its outdated MiG-29 fighters (Tut.by, June 21, 2017). Belarus obtained the first four Su-30SMs in 2018–2019, and four more will arrive in 2021–2023. If financial conditions allow, Belarus will receive the last four fighter jets in 2022.

This means that by 2022–2023, the Belarusian Air Force will have 12 Su-30SM fighters. Adding to this total the hypothetical eight Su-30s that Russia can transfer for joint air patrols and to the joint Air and Air-Defense Forces combat training center, that makes only 20 fighters total, instead of the required minimum of 36 (excluding the two Belarusian MiG-29 squadrons with questionable operational and technical characteristics)—so still not enough to guarantee the reliable protection of Russia in the Western strategic direction, according to Russian strategists. Consequently, the Kremlin will surely raise the issue of a Russian airbase in Belarus again, and likely again at the least opportune moment for Minsk.