The Hijacking of the Ryanair Flight Over Belarus: A Russian ‘Reflexive Control’ Operation? 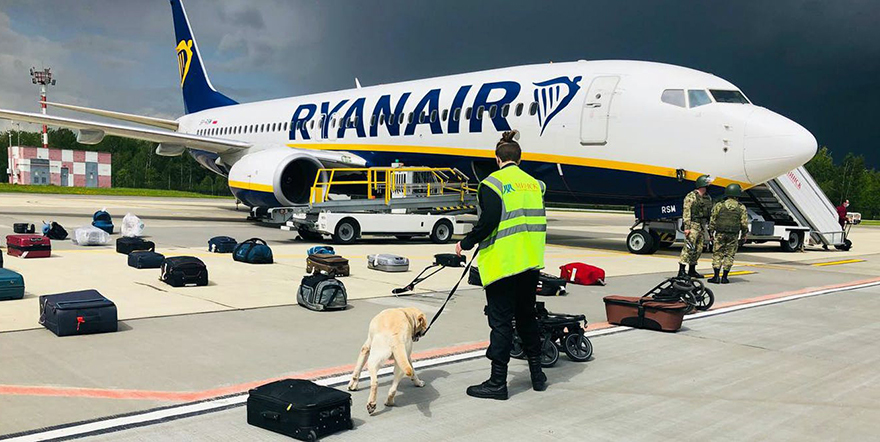 The Belarusian authorities’ forced landing of the Vilnius-bound Ryanair Flight 4978 at Minsk airport, on May 23, and the arrest of the opposition NEXTA Telegram channel founder Roman Protasevich, who was traveling aboard the plane, raised the political crisis happening inside Belarus since last August to the top of the global agenda (see EDM, May 24, 25). Much uncertainty remains about which actors were actually behind this special operation not to mention their real motives and ultimate goals. Nonetheless, mounting evidence suggests that the Russian intelligence services were involved every step of the way, starting from this operation’s initial design to sharing intelligence with their Belarusian counterparts in order to provoke a proper programmed response.

According to the Greek internal security services, Protasevich was being tracked by unknown people, likely Belarusian or Russian intelligence agents, for days in Greece before boarding his flight from Athens to Vilnius, Lithuania, on May 23. Protasevich, whom the Belarusian authorities had earlier put on a terrorist watchlist, was returning to the Lithuanian capital four days after the end of the Delphi Economic Forum in Athens, attended by many Belarusian opposition figures, including Svetlana Tikhanovskaya. As part of the same trip, he had been enjoying a short vacation with his girlfriend, Sofia Sapega, on the island of Crete. Greek intelligence investigators have said the two were under extended surveillance the entire time they spent in the country: at least three unknown operatives were tracking Protasevich throughout Athens since his arrival prior to the start of the Economic Forum. After the conference ended on May 16, Protasevich spent several days in Crete with his partner, where they were also apparently being monitored by Russian or Belarusian intelligence officers, the Greek special services asserted (TA NEA, May 23; VICE, May 27; Otkrytyye Media, June 4). Notably, however, Greece’s Prime Minister Kyriakos Mitsotakis, in an interview with the German newspaper Bild, disputed that there was any evidence of spies following the Belarusian activist or boarding the plane with him (Greek Reporter, May 28).

According to Protasevich, before the flight, he saw a certain Russian-speaking middle-aged man closely observing him. Protasevich said the unknown individual tried to photograph his documents but then left, even though he was next in line for a document check (T.me/belamova, May 23).

Based on CCTV footage captured in hotels and the Athens airport, the Greek Ministry of Interior concluded that Protasevich and Sapega were being tracked by intelligence operatives with Russian passports. The Greek authorities reportedly believe these intelligence personnel operated on behalf of the Belarusian security agencies and helped confirm whether Protasevich was onboard the Ryanair plane that would pass through Belarusian airspace (VICE, May 27).

Indeed, Belarusian President Alyaksandr Lukashenka himself, speaking before the parliament on May 26, insinuated that Protasevich’s presence on the flight was by no means a mere coincidence (which would have corresponded with the version of events all along claimed by the Belarusian side). On the contrary, he stated that even in the absence of a bomb threat (the reason Minsk has given for forcing the plane to land), had he known about the presence of the “terrorist” Protasevich on board, he would have had the right to demand that the aircraft be grounded in order to arrest him (Belarus Segodnya, May 27, 2021). Lukashenka’s statement, thus, indirectly confirmed that the Belarusian side received information about Protasevich onboard the Ryanair jet from some external source—likely the Russian intelligence agencies—and decided to use the occasion to detain the young activist.

The Belarusian intelligence services—the First Directorate of the State Security Committee (KGB) and the Main Intelligence Directorate (GRU) of the General Staff of the Belarusian Armed Forces—likely lack the resources and capabilities that would allow them to unilaterally plan and conduct surveillance operations abroad. Even in the earlier case involving the alleged uncovering of an attempted coup d’état and detaining of its conspirators—political consultant Alexander Feduta and lawyer Yury Zenkovich—in Moscow, the Belarusian KGB notably requested technical and surveillance assistance from the Russian Federal Security Service (FSB) (TASS, April 17). Without this support from the FSB, the Belarusian operation could hardly have been carried out successfully, in principle.

Russian intelligence services have traditionally served as the main contributor of intelligence and analytical information for their Belarusian counterparts. And the same circumstances likely drove the incident of the forcible landing of the Ryanair plane and the detention of Protasevich. From this perspective, it is worth pointing out that two weeks later, on June 3, the Belarusian KGB and the Russian Foreign Intelligence Service (SVR) held their 20th joint meeting, in Vitebsk, Belarus. Commenting on its results, SVR Director Sergei Naryshkin stated that one of traditional areas of cooperation between the two countries’ intelligence services specifically involves combating international terrorism. In this regard, they are strengthening the analytical component of their joint work involving large amounts of information (BelTA, June 3). They also agreed to work together to counter the alleged destructive activities of the West purportedly aimed at destabilizing the political and socio-economic situation in the Union State of Russia and Belarus (BelTA, June 3). Meanwhile, Moscow removed exiled opposition leader Svetlana Tikhanovskaya from the federal database of wanted persons almost immediately after the incident involving the Ryanair plane. She had been on the Russian terrorist watchlist, at the request of the Belarusian authorities, since October (RBC, May 25). This move indirectly suggests that Protasevich acted as a decoy for Lukashenka, and the Kremlin has its own vision of whom to consider a “terrorist” and whom not when it comes to the still-unfolding Belarus crisis.

Taking all this into account, it is possible to see evidence of a Russian reflexive control (influence) operation involving the Ryanair jet and deduce its purpose. Namely, by utilizing pro-Russian proxies within the Belarusian security apparatus, the Russian side was able to provide the Belarusian leadership with intelligence about Protasevich being onboard Flight 4978 and suggested that the jet should be forced to land—thus, precisely engineering Lukashenka’s response to this situation. As a consequence, Belarus is now considered a rogue state by the West and a threat to global peace and security, necessitating a systematic policy of sanction pressure, deepening the country’s international isolation, and increasing its dependence and vulnerability on Russia (see EDM, May 27). The Belarusian crisis is now guaranteed to also be on the agenda of the talks between Presidents Vladimir Putin and Joseph Biden on June 16. And the Kremlin will almost certainly offer its own “solution” to the Belarus problem.