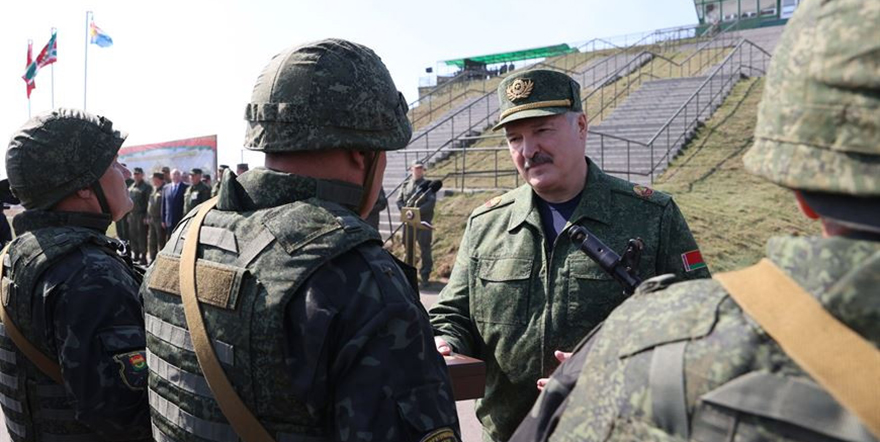 After the West extended additional sanctions against Belarus and following Belarusian ruler Alyaksandr Lukashenka’s big press conference on August 9, the Kremlin began signaling its readiness to implement the so-called Armenian model to resolve the political crisis in the country.

During Lukashenka’s press conference last month, the president once again rejected the need to deploy permanent Russian military bases on Belarusian territory and dismissed any further deepening of political-military integration with Russia. Additionally, he reaffirmed Belarus’s security guaranties toward Ukraine, refused to recognize Russia’s annexation of Crimea, and demonstrated Minsk’s openness to negotiations with the West without preconditions (President.gov.by, August 9). A day later, the editor-in-chief of Russia in Global Affairs, Fyodor Lukyanov, published an article that offers important hints about the Kremlin’s evolving position on the Belarusian crisis (Russia in Global Affairs, August 10).

First, Lukyanov admits that all external (including Russia and the West) and internal actors of the Belarusian crisis have reached a complete stalemate, additionally noting that the political crisis itself was caused by the mistakes of the Belarusian leader and the regime’s inability to offer “an attractive image of the future” for the population, rather than by the actions of the West. To move beyond this situation—which is aggravated by the risk of new sanctions against Russia for supporting Lukashenka—Moscow is ready to promote regime change in Minsk in return for geopolitical guarantees from the new democratic leadership that Belarus will remain in the Russian sphere of influence, the Moscow-based writer argues. Belarusian consent to the deployment of a Russian military base could serve as such a guarantee, according to Lukyanov. He emphasizes that “for the Kremlin, to keep the ‘external contour’, i.e., to set the framework for the foreign policy of a country that is its important neighbor, leaving all internal activities to its own people and their understanding of democracy, is not a bad alternative to integration or unification.” Notably, he supports his argument by raising the Armenian case (Russia in Global Affairs, August 10). The Kremlin did not explicitly interfere in Armenia’s domestic affairs during the 2018 Armenian Velvet Revolution, despite the fall of the nominally pro-Russian regime of Serge Sarkisian and the rise of the nominally pro-Western Nikol Pashinyan, because Russia’s permanent military presence in that country guaranteed that no radical geopolitical reorientation from Moscow would happen.

The current debate on what the Kremlin should do with Lukashenka in the context of the political crisis in Belarus is not new. Since the start of the anti-Lukashenka protests a year ago, Russian strategists with intellectual influence over the Kremlin—ranging from Andrey Kortunov, the director general of the Russian Council on Foreign Affairs (Russiancouncil.ru, August 17, 2020), to Dmitry Trenin, who heads the Carnegie Center in Moscow (Carnegie.ru, August 17, 2020)—have emphasized that the Belarusian leader would not be able to return to the pre-crisis status quo and Russia had to consider other options. These views reflected the atmosphere apparently prevailing in the Kremlin at that time.

In late 2020, a set of documents was leaked from the Russian Presidential Office’s Department for Interregional and Cultural Relations With Foreign Countries, headed until March 2021 by Russian Intelligence Service (SVR) Major General Vladimir Chernov. This “Chernov dossier” allegedly reproduced the Kremlin’s plans to exploit the Belarusian presidential campaign and the subsequent political crisis as a favorable pretext to interfere in Belarus’s internal affairs: including shaping the crisis, creating new pro-Kremlin political forces in Belarus, buying up available/ready-made political assets from the government and opposition, and imposing key parameters of constitutional reform to transform Belarus from a super-presidential republic into a parliamentary or parliamentary-presidential one. All these active measures would evidently facilitate the expansion of Russian interests and influence in Belarus in a post-Lukashenka environment (Theins.ru, December 25, 2020).

By (indirectly) raising the prospect of applying the Armenian model now, the Kremlin is not only resuming its approach to the Belarusian crisis but also signaling to both Western countries and the Belarusian opposition that it is ready for a dialogue as long as they take into account Russian strategic interests and concerns. Indeed, Lukyanov’s reference to Armenia in his aforementioned article is no accident. Immediately after the outbreak of the Belarusian political crisis last year, former Swedish prime minister Carl Bildt published a piece, “The Armenian Model for Belarus,” in which he implicitly admits that Belarus is part of Russia’s sphere of influence (like Armenia) and the Belarusian revolution was not precipitated by geopolitical motivations such as a public desire to join Euro-Atlantic structures (unlike the Revolution of Dignity in Ukraine) (Ecfr.eu, August 19, 2020).

The Kremlin had essentially been trying to force the Armenian model of political and military integration on Lukashenka’s Belarus without success since 2015, when, in addition to deploying permanent Russian military bases, Moscow insisted on subordinating the Belarusian Armed Forces (as part of the joint Regional Group of Forces) to the Western Military District of Russia (see Jamestown.org, March 2, 2020). But Lukashenka successfully withstood this pressure then and continues to preserve his strategic autonomy vis-à-vis Russia (see EDM [1] [2], May 11, August 19).

More recently, Kremlin-linked strategists have acknowledged that, under current geopolitical conditions, this model cannot be implemented without first changing the political status quo in Minsk, as otherwise it would provoke the introduction of new sanctions against Russia for undermining the independence and sovereignty of Belarus (according to the US Congress’s 2020 Act on Human Rights, Democracy and Sovereignty of Belarus). And Moscow at this stage does not intend to expose itself to such economic penalties solely for the sake of its Belarusian ally, particularly since any agreements concluded with Minsk at present—including those to deepen integration within the Union State—would have minimal legitimacy in the eyes of the international community.

Thus, the Kremlin is seeking the mantle of Belarusian crisis solver in the eyes of the West, while simultaneously developing a new model of interference that will legitimize Russian strategic intentions to expand its influence in Belarus. In short, the Kremlin’s formula is to facilitate regime change in Minsk in exchange for authorization to deploy Russian military bases in Belarus by the country’s new leadership as well as Western acceptance of Belarus as a “legitimate” part of Russia’s privileged zone of geopolitical interests. Such a grand bargain would put an end to Belarus as a sovereign and independent country, all while ignoring the positions of different parts of Belarusian society and the interest of other geopolitical actors present in the region, including China.