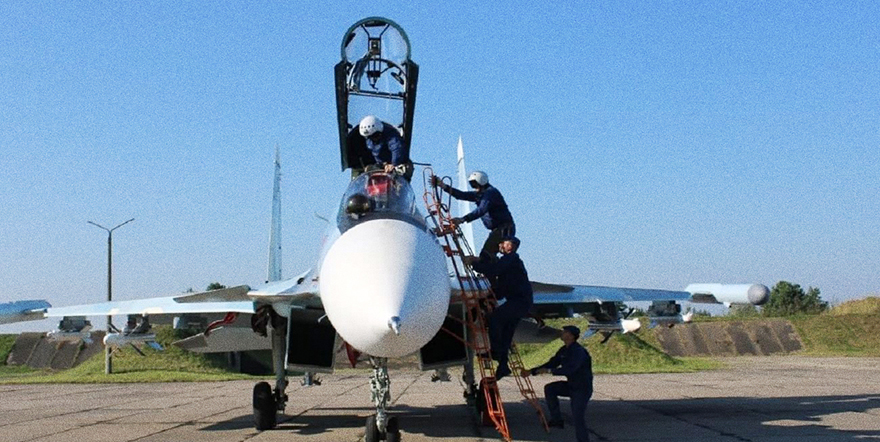 While Russia and Belarus made final preparations to kick off their quadrennial joint strategic-operational exercise Zapad 2021, the two countries’ air-defense and air force units were put on joint duty as part of the recently established training and combat center in Grodno Oblast, in western Belarus. Russian military assets and crews arrived in Belarus at the end of August through the beginning of September, just before the Zapad 2021 drills, which officially lasted from September 10 to 16. Although these steps might be misconstrued as evidence that the Kremlin is finally deploying a Russian military base on Belarusian territory, in fact, the Belarusian side is in charge of both the activities and use of the joint center.

On September 9, the joint units participated in a ceremonial ritual of taking on combat duty to jointly protect the airspace of the Union State of Belarus and Russia, at the 61st Fighter Air Base of the Belarusian Air Forces (military unit 54804), in Baranovichi. At the same time, joint air-defense units in the western part of Belarus assumed combat duty with the same tasks (Vayar.mil.by, September 9).

According to the Belarusian Ministry of Defense, the purpose of the Joint Air-Defense and Air Force Training and Combat Center is to improve professional instruction and study new types of equipment that, in the near future, may be put into service in the Belarusian military. Moreover, the center will improve the practical skills of personnel from the Armed Forces of Belarus and the Russian Aerospace Forces (see EDM [1] [2], May 11).

Russia contributed both air-defense and air force components to this facility. On August 28, the first train loaded with Russian military equipment and crews—including multifunctional radars, command-and-control vehicles and at least two S-400 surface-to-air missile (SAM) launchers—arrived in Grodno, Belarus (Voentv.mil.by, August 28). Presumably this equipment is from the 210th Anti-Aircraft Missile Regiment of the 4th Air-Defense Division of the 1st Army of the Air- and Missile-Defense Forces. On September 8, at least a wing of four Russian Su-30SM heavy fighter jets landed at the 61st Fighter Air Base in Baranovichi (Vayar.mil.by, September 8), where they will stay to conduct both joint training and combat duty missions. Presumably, they belong to the 14th Guards Fighter Aviation Regiment of the 105th Combined Aviation Division of the 6th Air Force and Air-Defense Army of the Western Military District of Russia.

Russian sources claim that the S-400 units brought into Belarus will soon be deployed on the territory of the 2285th Independent Radio Technical Battalion, near the positions of the 1st Anti-Aircraft Missile Regiment of the Belarusian Air-Defense Forces, equipped with S-300PS SAMs, in Grodno Oblast (Svpressa.ru, August 30). Belarusian military officials have been careful not to divulge any details on the matter. But if that reported location is accurate, it means Russian S-400 launchers would be stationed only four kilometers from the Polish border.

Belarusian Armed military officials argue that the joint training and combat center in Grodno will strengthen the practical component of the Unified Regional Air-Defense System (URADS) of the Union State (Vayar.mil.by, September 9), meaning the facility is presumably included in this system as a subordinated element. According to the agreement on the joint protection of external borders that established the Union State URADS (Cntd.ru, November 2, 2016), peacetime duty by joint assets and crews is carried out in accordance with the duty plan approved by the Russian and Belarusian ministries of defense. Russian aircrews on combat duty in Belarusian airspace are put in the air by an agreed decision of operational duty officer of the Control Center of the Aerospace Forces of the Armed Forces of the Russian Federation and the operational duty officer of the Central Command Post of the Air Force and Air-Defense Forces of the Armed Forces of the Republic of Belarus. The procedure for the use of weapons and military equipment by forces on air-defense duty is determined by the legislation of the party on whose territory the weapons and military equipment are used. In sum, this means that, legally, all Russian military assets and crews assigned to the Joint Air-Defense and Air Force Training and Combat Center in Grodno are subordinated to the Belarusian side—i.e. the Central Command Post of the Belarusian Air Force and Air-Defense Forces. In war time, the URADS becomes a composite element of the Regional Group of Forces of Belarus and Russia, whose permanent commander is the chief of the General Staff of the Belarusian Armed Forces.

Additionally, since the URADS was created back in 2013, only Belarusian representatives had been put in charge of it—Air Forces and Air-Defense Forces commanders of the Republic of Belarus Oleg Dvigalev (2013–2017) and Igor Golub (since 2018). And if political and geopolitical expediency prompts Belarusian President Alyaksandr Lukashenka to withdraw the visiting Russian forces back to Russia, he will take this step. Illustratively, he ousted four Russian Su-27PM fighter jets in 2015, against the backdrop of the escalating Russian-Ukrainian conflict.

Therefore, the joint center in Grodno Oblast should not be seen as a Russian “military base” in terms of command and control since it lacks extraterritorial status and does not subordinate directly to Russian command. It is worth noting that the Kremlin specifically tried to dictate those terms and conditions in 2015, when it unsuccessfully pushed for installing a Russian airbase in Bobruisk, Belarus (see Jamestown.org, March 2, 2020).

By subscribing to the idea of a joint training center on Belarusian territory, Lukashenka apparently tried to secure the inflow of modern Russian military equipment (at least eight Su-30SM fighter jets and one S-400 SAM battery with Russian crews) for free and under his command. But it seems the Kremlin saw through his cunning plan and provided him with only four Su-30SMs and two S-400 SAM launchers, most likely on a rotational basis. The Russian leadership still considers a permanent military base in Belarus as the only acceptable option. Therefore, Moscow is not interested in reinforcing the Belarusian Armed Forces by supplying extensive modern Russian military equipment for free or even on preferential terms (see EDM, March 2, September 10).