Does the US-Russia deal on Syria come at the expense of Iran? 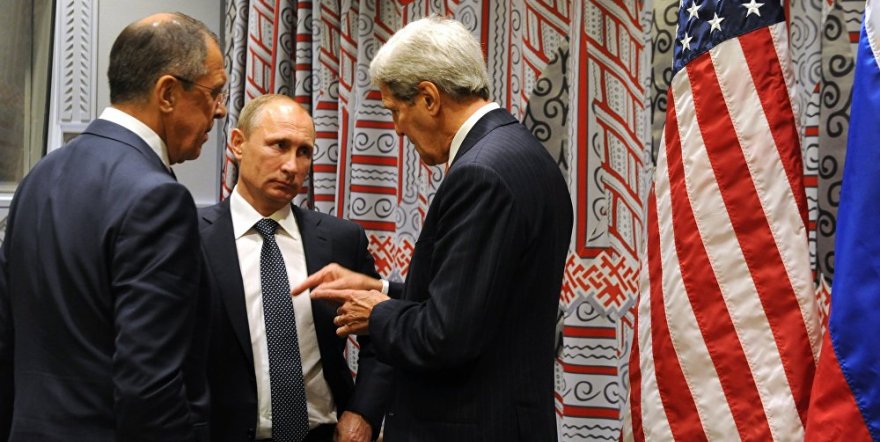 John Kerry’s visit to Moscow on December 15 was marked by what the public in Russia was eager to call “US concessions to Russia”. And those “concessions” make perfect sense for the sake of ending the Syrian crisis. The consequences of those alleged concessions, however, might be devastating for Washington’s strategy in the Middle East

Kerry in Moscow: regime-change in Syria is not the goal

Russian media and experts community on December 16 triumphed in words pronounced by the US Secretary of State John Kerry during his meetings with the Russian counterpart Sergei Lavrov and President Vladimir Putin. “We don’t seek to isolate Russia as a matter of policy,” said John Kerry. That was accompanied by an even more important statement on the Syrian crisis itself: the USA and their partners, Kerry said, “are not seeking so-called regime change” in Syria.

Russian Foreign Ministry Spokeswoman Maria Zakharova went as far as to say that “Kerry has publicly renounced the US policy of isolation against Russia”. No matter how much exaggerated, this statement still reflects general perception of Kerry’s visit. It was perceived (not in Russia alone) as a major shift in US stance on Syrian crisis and Washington’s eagerness to get along with Bashar al-Assad staying in power. “No ’regime change’ in Syria: After talks in Moscow, Kerry accepts Russian stance on Assad” said Fox News headline refrained in other media.

Despite all the fuss, there wasn’t much news in US diplomacy chief’s statements. They were actually a follow-up of President Obama’s reference to Russia in his December 6 nation address. Mr.Obama then said:

“with American leadership, the international community has begun to establish a process — and timeline — to pursue ceasefires and a political resolution to the Syrian war. Doing so will allow the Syrian people and every country, including our allies, but also countries like Russia, to focus on the common goal of destroying ISIL — a group that threatens us all”.

So it seems that Washington predictably admits Russia’s increased role in Syria and the Middle East and strives to get Moscow on the right side of political process. The rub, however, is that “narrowing the gap” with Moscow might be of little use both for the US-Russia relations and for the Middle East.

Russia: Assad staying at power is not a goal either

It has been widely accepted that one of Moscow’s core interests in Syria is to support the regime of Bashar al-Assad as one of its key regional allies. Russia nevertheless repeatedly demonstrated its eagerness to discuss different political options in Syria. In 2015, Moscow established political ties with all key stakeholders in Syria including different opposition fractions and maintained close relations with Iran’s key regional rival — Saudi Arabia. Several sources stated that Moscow showed signs of acceptance of Assad’s resignation in case the structure of the future coalition government leaves Russia’s influence in Damascus intact. Intelligence online and other sources mentionedAli Mamluk, Syria’s intelligence chief with expansive Sunni connections (including ISIS’ former Baathist officials) as a possible alternative leader.

So it seems that when the US representatives talk about “no need for regime-change” they don’t come up with any good news for Moscow. At least they offer nothing that could be a real prize in Syria for the Russian leadership.

Russia seems eager to enter a bargaining process to exchange this or that scenario of Assad’s resignation (he might step down before the elections or give up his nomination for elections and so on) for a favorable structure of the future coalition government. And it seems highly likely that Moscow’s view of coalition will be very close to that of Riyadh’s. Given the Assad family’s intimate ties with Saudis, Syria after Bashar al-Assad might well become the Kingdom’s protectorate. This would be a nice quid pro quo on Moscow’s behalf in light of 100+ billion investment, arms and nuclear energy contracts that have been or are getting ready for being signed between Russia and Saudi Arabia.

Iran is eager to say something on the issue

Syrian “exchange deal” however has a very determined opponent — Iran. Unlike Moscow and Riyadh, Tehran has only one reliable political asset in Syria, that is Bashar al-Assad. His ouster will wipe out the remainder of Iran’s influence in both Syria and Lebanon, which is just unacceptable for the country’s leadership.

It is also worth saying that up to now Moscow’s military intervention in Syria’s was not of any use for Iranian forces fighting there. Despite seemingly successful Russia’s airstrikes Iran keeps losing soldiers and generals in Syria which might also be the result (intended or not) of Russia and Israel military’s consultations and intelligence exchange. So ultimately Russia’s involvement in Syria led to nothing but Iran losing ground, people and influence in the country.

To add insult to injury, Lebanon decided to participate in a recently initiated Saudi-led anti-terrorist coalition excluding both Iran and Iraq. The coalition by the way was set up by the Deputy Crown Prince Mohammed bin Salman — one of Vladimir Putin’s “new friends” (they met twice in 2015). It’s not hard to tell that the new, Sunni-based alliance will primarily target Shia terrorists like Yemeni Houthis, Bahrain’s Shias and possibly even Shia militias in Syria and Iraq. Which certainly will not make Tehran happier.

Iran’s advisor to Supreme Leader Ali Akbar Velayati has already declared the ouster of Bashar al-Assad a “red line” for Tehran. After that Iranians leaked information on more middle-range missile tests allegedly carried out in November that probably violated the UN sanctions.

And right after Mr.Kerry left Moscow, Iran’s Fars News agency reported on the general Qasem Soleimani’s visit to Moscow just a week ago, in early December. The message must have illustrated the intensity of Russia-Iran ties. But who were they trying to deceive? Moscow immediately debunked the Fars News report.

Any “B plan” for Iran on Washington’s behalf?

One wonders if putting Tehran into dire straits is a right way to handle the situation in the war-torn Middle East.

Russia that can easily disengage from the Syrian campaign at any time and has little to lose in this scenario. If Iran abandons the process of normalization with the West, goes nuclear and maybe even initiates a military conflict with Sunni states, Moscow will be alright with that. After all, a big war in the Persian Gulf is always a good piece of news for an oil exporting country like Russia. In fact this scenario might even be seen as Moscow’s intended ultimate purpose for engaging in Syrian civil war.

Shia-Sunni big war would also be a good piece of news for ISIS by the way, bearing in mind that Iran and its ally Iraq have been a major regional rival for the Daesh so far.

But what about the USA? Do the guys in Washington have a “B plan” for appeasing Iran and making it comply with international law regimes (including the July 14 nuclear deal) in case Iranian leadership sees its core interest trampled and its security threatened? Especially if and when we see Daesh gaining more ground in Afghanistan and the situation in post-Soviet Central Asia going out of control.

That is probably a good question to think of in the wake of the decisive December 18 Syria meeting in New York.