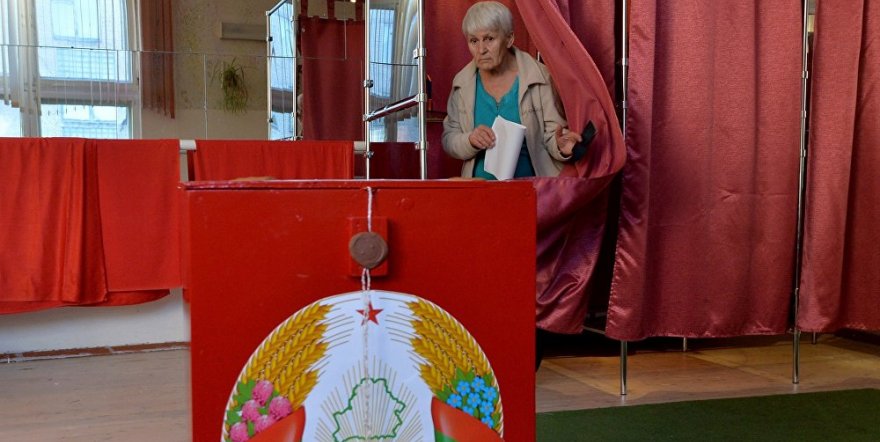 This campaign presented the authorities with an opportunity to demonstrate their openness and improve performance on their democratisation and human rights record. Instead they used it as a testing ground for their ability to dominate and manipulate domestic politics.

This choice sends a strong message about the authorities’ assessment of the strategic environment and oncoming challenges.

Given the insignificant role of local councils in the Belarusian political system, local elections rarely stir significant public attention. They are usually perceived as “not a big deal” (albeit with traditionally high, but hardly trustworthy, reported turnout).

Accordingly some believed that the authorities would use this relatively insignificant campaign in order to repair their image in respect of liberalization and democratization, which was an important part of the Belarus-West normalization efforts in  Unfortunate developments in 2017 substantially damaged this image, including mass protests over the “anti-parasite decree”, the suppression of those protests, and multiple detainments of independent and opposition activists, politicians and journalists.

The actual campaign scenario upset those expectations. The authorities undertook a major effort to safeguard an unrealistically high level of declared turnout. They claimed that some 77% of eligible voters showed up at the polling stations. This clearly contradicted numerous independent reports of low public interest in the elections.

Independent and opposition observers and candidates claimed numerous discrepancies between the turnout they observed and the one reported by the electoral commissions. The latter often failed to explain those discrepancies or even did not make any effort to do so.

The authorities claimed a massive (over 34%) turnout during early voting. Besides, the observers reported an unusually high level of postal voting. Both are a handy tool for manipulation. The ballots cast early or away from the station cannot be monitored by observers. Accordingly, there are hardly any opportunities to check the authenticity of reported turnout level.

For the first time in many years, the observers claimed to detect the use of the infamous technique called carousel voting (multiple voting by designated voters at different polling stations). An observer even managed to take part in it personally (voting three times at different polling stations) and now demands an investigation into this affair from the Ministry of the Interior and the Investigative Committee.

The vote count was also kept expectedly non-transparent, according to independent observers. At one polling station, the scandal erupted and led to a recount overseen by the public that showed the opposition candidate taking the vast majority of the votes cast on the main election day. However, he eventually lost the race after the early voting ballots were taken into consideration.

Quite logically the non-transparent electoral process resulted in non-transparent outcomes. Only two opposition candidates, both at the lowest village level, were elected alongside over 18,000 new deputies allegedly authorized by the powers that be. Of those elected almost 56% were incumbent deputies and only 2.5% represented political parties (all of them pro-government).

One of the two successful independent candidates was Roza Strelchanka, elected in a major village in the Kalinkavičy district of the Homiel region. Soon after her victory, unidentified persons called her using the phone number of the regional administration and threatened to put her into a mental health facility. The other successful candidate re-elected in 2018, Valery Bilibukha from the unregistered Belarusian Christian Democrats, also has a long record of dealing with pressure from the authorities.

Alongside the reported poor performance of the opposition, other outcomes merit comment.

The Communist Party’s showing proved quite remarkable. The pro-government Communists managed to bring 309 of their rank to the councils at various levels (including taking 10% of seats on the Minsk City council).

The advance of Russia-advocates represented another interesting feature. Among those elected, 21 were the citizens of the Russian Federation who have the right to run for the local elections because they have permanent residence in Belarus. 127 of the successful candidates were the members of the Republican Party of Labour and Justice that positions itself as an openly pro-Russian actor (its leader Vasily Zadnepryany recently claimed that his party recognizes Crimea as a legitimate part of Russia).

Getting ready for the tough times?

The picture outlined poses a question: why was the Belarusian Government willing to go to such lengths for the delivery of such questionable outcomes?

One thing can be said confidently: the authorities have dropped the idea of restructuring the country’s political system (even if they ever planned to). This contradicts rumours and debates in 2017 regarding the possible transformation of the constitution and electoral law that would favour the development of political parties. The Liberal Democratic Party of Belarus (LDP) even formally came up with some suggestions, such as the introduction of party list voting. But the outcomes of the local elections clearly show that those suggestions are off the table. Quite illustratively, despite running a rather vigorous campaign, LDP ended up with only five delegates elected.

The other thing one can say with confidence is that the authorities made certain decisions on further political developments. Alexander Lukashenka, it seems, will rerun for the presidency when his current term ends and will do so it in the “old school” manner; with heavy reliance on economic incentives, “administrative resources” and similar notorious features.

This roll-back to more manipulative and less democratic policies has everything to do with how the authorities assess the existing strategic situation. The forthcoming parliamentary and presidential elections (due to take place no later than in August-September 2020) will most probably run amid persisting economic turmoil, popular unrest, unfriendly Russian media and indifference from the EU and USA. With that in mind, the authorities are preparing to hold those elections the way they perceive as safe. It is therefore quite natural that they reported an unrealistically high level of turnout. Their real potential for mobilizing the constituency and the real level of their electoral support thus remain unclear for the wider public.

The problem, however, is that such way of running elections implies excessive reliance on the security services. As the loyalty of those is not warranted, especially in critical situations, their non-transparency is inevitably ambivalent and might affect not only the public but also the authorities themselves. It is interesting to know in this context whether it was the real intention of Lukashenka to let so many Russian and pro-Russian politicians into the local and regional councils; or whether this result actually reflects the “independent” influence of unidentified actors within the establishment.