Belarus: From unpredictable Kremlin to the West and the East 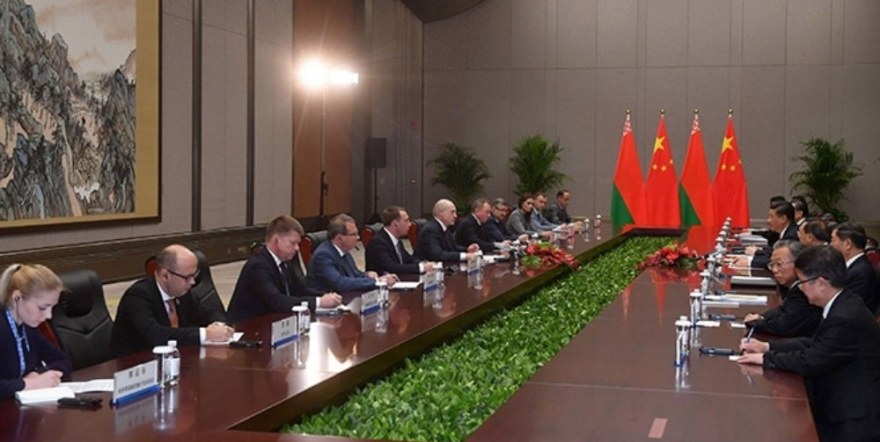 Belarus authorities began preparations for the presidential and parliamentary elections and tried to ease the protest mood with the financial methods. In foreign policy, the trend of balancing between Russian, European, and Chinese directions is still preserved.

Domestic policy: Stake on the security services and tightened control

The Belarusian authorities continued to pursue the policy of economic liberalization, removed the barriers for the business development and even scheduled the tax reform in the conditions of the reduction in budgetary resources. Thus, Aleksandr Lukashenko supported the proposals of the business community on the business decriminalization (the Criminal Code enactment about illegal entrepreneurship and pseudo-entrepreneurship). The Ministry of Finance considers reducing the income and the profit tax in the midterm.

Military and security forces tried to ease the protest mood and decrease the number of unauthorized campaigns with such financial mechanisms as high penalties for the participants. At the same time, the authorities made some concessions to the opposition and civil society by permitting to hold the public events in a reduced format with respect for the authorities. So, on March, 25 the Freedom Day (an informal celebration of the Independence Day, the day, when the Belarusian People’s Republic was established in 1918) gathered about 30 thousand people in Minsk. The authorities also sanctioned the traditional opposition campaign “Chernobyl way” on April, 26 in memory of the Chernobyl Nuclear Power Plant tragedy of 1986, but they slightly altered organizers’ plans.

Aleksander Lukashenko continued to rely on the security services when making decisions on rotating the officials, for which the anti-corruption investigations were actively used as a tool. Only in May-June, the head of the Presidential Administration department (abuse of power), 33 officials from the healthcare sector (systematic bribes while purchasing medical equipment and medicines), the assistant to the president of Belarus — the inspector for the Grodno region Sergey Rovnieko (bribery in the amount of $200 thousand) were under investigation.

Meanwhile the KGB, headed by Valeriy Vakulchik, significantly strengthens its position compared to the other military and security forces and government staff in general, as it influences not only the resignations but also appointments. In its turn, the role of the Ministry of Internal Affairs, headed by Igor Shunevich, becomes less important, as the opposition protest activity decreased. The Interior Ministry is also trying to engage in an anti-corruption war. It appears that Belarusian authorities have already started preparations to the presidential and parliamentary campaigns of  In April, Belarus parliament adopted changes to the law on mass media in the first reading, including registration of online media and mandatory identification of commentators on the websites. The MPs disregarded the proposals of the civil society and the journalist associations. The developers of these innovations believe that such tightening of the rules on commenting on the Internet should reduce the level of criticism of the Belarusian leadership, and decrease the politicization of the population for the electoral period. These measures are also designed to limit external influence on public opinion and interference in the election campaign, primarily from the Kremlin.

China’s role as a partner for Belarus in the economic reforms grows further. Recently the Ministry of Finance of Belarus and Chinese rating agency China Chengxin International Credit Rating (CCXI) signed an agreement on assigning the credit rating to Belarus. Thus, the preparation process for Belarus to enter Chinese credit market has finished. According to the Ministry of Finance plans, Belarus is to borrow $400-500 mln from the Chinese financial market. It appears that the main goal is to raise funds for refinancing external liabilities, as Belarus needs the loans of at least $1 bln annually until 2020. Active work continued upon the development of Sino-Belarusian industrial park “Great Stone”.

Meanwhile, in Belarus, there are trends that threaten macroeconomic stability. Due to the increase in the population income level, imports are growing, including consumer goods. Even greater problem is the rapid increase of Belarusian debt burden. According to the National Bank of Belarus, the high credit activity of Belarusians can lead to the deficit in the country’s balance of payments and worsen of the situation on the foreign exchange market. On the other hand, the Belarusian economy continues to demonstrate the previously formed positive trends. Particularly, in May 2018 there was a record of devolution. Prices for goods and services fell by 0,3%, and annual inflation was 4,4%.

Belarus authorities had fervent hopes for the range of new economic initiatives. Therefore, on March, 28 the Decree on the Development of Digital Economy (#8) came into force. This document prolongs the expiry date of the special legal status for Hi-Tech Park (HTP) till January 1, 2049, including a number of innovations. The key points of the Decree are the following: expanding activities for the HTP residents, supporting the IT-education and training, creating the environment for the development of the production IT-companies, introducing complex legal regulation of businesses based on the blockchain technology. As a new kind of activity for the park residents, there is the development of biotechnologies, medicine, aviation and space technologies, cybersport. The Decree also provides the opportunity for the HTP residents to not only develop, but also to produce hi-tech science-intensive products. By the end of 2017, HTP export amounted to about $1,3 bln. Within the first 5 months of 2018 more than 100 new residents were registered in HTP.

Since last year the Ministry of Economy has been elaborating the schedule for the so-called Belarus industrialization — a map of the projects of the investment opportunities. It is designed to ensure the country’s GDP growth to the level of $ 100 billion by 2025. The Industrialization Plan includes 1742 investment projects in three key directions: import substitution, joint projects with China, projects initiated by the state and business. Nevertheless, there is still uncertainty about the sources of funding for these projects.

Belarus-Russia relationships were marked by Minsk’s attempts to formulate a constructive agenda and use the beginning of the new presidential term of Vladimir Putin to “reset” the bilateral relations. However, these attempts have not yielded significant results.

During the Eurasian Economic Union summit on May, 14 in Sochi, the President of Belarus Aleksander Lukashenko spoke with the traditional “constructive criticism” of the organization. His criticism was mostly aimed at the restrictions in mutual trade and the lack of progress in creating the single market of gas, oil, and oil products. The main event in Belarus-Russia relations was the meeting of the Supreme State Council of the Union State on May, 19 in Minsk, which was supposed to solve most of the present problems. However, the meeting of Vladimir Putin and Aleksander Lukashenko was rather formal and fruitless, as it has not resolved the main problems in the bilateral relations:restrictions on the supply of Belarusian agricultural products to the Russian market, unilateral actions by the Russian side to deploy border infrastructure on the border with Belarus, delay in signing an agreement on mutual recognition of visas, etc.d. Thus the relations between Russia and Belarus are still uncertain.

In short-term Belarus faces another problem that could undermine the stability of Belarusian economy. The Ministry of Finance assumes that the state may lose a significant part of income after Russia refuses to levy the export customs duties on oil and oil products. Overall, total loss may exceed over $2 bln which is about 20% of the state budget’s income in 2018. According to the plan of the Russian Ministry of Finance, the tax maneuver should be finished by the end of 2019. At the same time, the agreement on Russian gas prices for Belarus expires at the end of 2019. It is for the years that the presidential and parliamentary campaigns in Belarus start. Therefore, there is a great possibility of a new gas-and-oil conflict between Minsk and Moscow, considering fundamentally different approaches to energy pricing. Moreover, a political factor will appear, specifically the intention of the Kremlin to get strategic concessions from Belarus, using this point as a bargaining tool.

Apparently, for this reason, all this time Alexander Lukashenko sent various kinds of mobilization signals, demonstrating concern over the unpredictable actions from Kremlin towards Belarus. First he expressed concern about the Russian military activities on the Belarusian-Russian border, and on June 22, just a few days after the Union State summit in Minsk and the meeting with Vladimir Putin, he reported that there was a threat of being incorporated as a part of another state, turning into the “failed state”, as well as of provoking war in Belarus, as in Ukraine, if Belarus is unable to cope with economic problems.

Meanwhile, Belarus seeks to force events on the western flank of its diplomacy. The visit of EU Commissioner Johannes Hahn on June, 21 encouraged an open discussion about Belarus-Europe relations. The outcome was the European statement that the agreement on the priority of collaboration between the EU and Belarus will be signed in 2018. During his meeting with Johannes Hahn, Lukashenko traditionally pointed out the importance of Belarus as a transit corridor between the EU and the EEU, highlighting the absence of trading and transit barriers for European goods. Belarus intends to sign a basic framework agreement on partnership and collaboration with the EU in 2020 and also enter the World Trade Organization, which is essential to eliminate the obstacles in the trade with the EU.

One more problem is the stalled process in Minsk-Brussels negotiations about the visa regime facilitation and readmission. Although all the technical details of the agreement are almost ready, the main obstacle is the position of the EU on human rights and democracy in Belarus.

As for the Chinese direction, Minsk continued to increase its activity, primarily in the areas of economic cooperation and military-political cooperation. At the level of official visits, China demonstrated a special strategic interest in Belarus. So, on April, the new PRC Secretary of Defense Wei Fenghe came to Belarus with the official visit. Apparently, this visit should give new impetus to the development of the Belarusian-Chinese military projects, primarily the missile program. On May, Vice Premier Wang Qishan visited Belarus. During the Shanghai Cooperation Organization summit on June bilateral negotiations of Alexander Lukashenko and Chairman of the People’s Republic of China Xi Ji took place in Qingdao China. As the result of the visit, the intergovernmental arrangement on the visa-free regime for the owners of ordinary passports was signed.