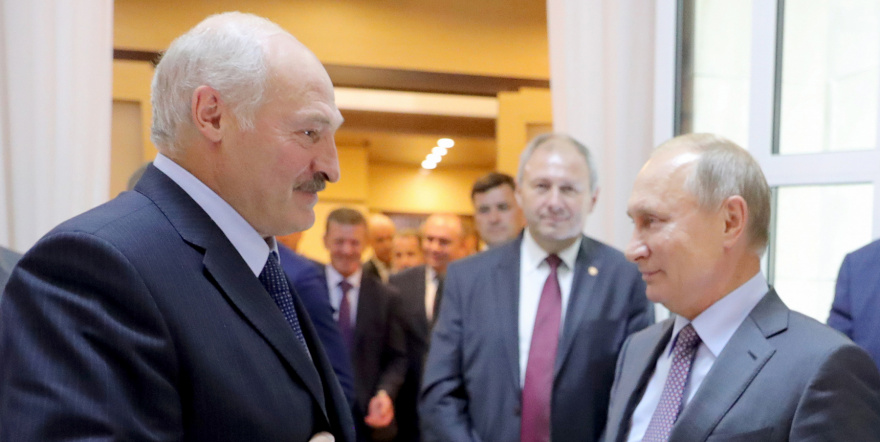 After ‘very successful’ talks between Alexander Lukashenko and Vladimir Putin on August 22 in Sochi, the Belarusian leader gave a detailed interview on what was achieved during the negotiations. It transpired that there were just two concrete outcomes to this summer meeting. First, the approval of the candidacy of Mikhail Babich as Russian ambassador to Belarus. Second, a decision to have a further meeting between the two leaders the following month.

New ‘difficult but productive’ talks took place on September 21. In the aftermath, Lukashenko discussed finalised agreements and their implementation with his government. Putin’s press secretary, Dmitry Peskov, confirmed the two counterparts will meet again on October That meeting will take place in Mogilev, Belarus. It will happen under the umbrella of the ‘Fifth Forum of Regions of Belarus and Russia.’

However, frequent meetings between heads of states are no proof of good relations. There are several unresolved disputes between the two countries festering beneath the surface.

One key reason behind the more frequent communication between Lukashenko and Putin? A desire on the Russian side to revise the agreement of April 2017. That involved Minsk and Moscow agreeing to discounted gas prices for Belarus. Based on the 2017 agreement, Belarus could charge re-export customs duties on 6 million tons of Russian oil. It specified volumes of Russian oil supplies to meet Belarusian domestic demand: i.e. 18 million tons. That agreement had only come after a wider crisis in relations between the two countries. The agreement had taken plenty of high-level hand-wringing.

Two reasons why the Russians now want that revised. To begin with, global oil prices have risen sharply since April 2017. That has translated into increased revenues generated by Belarus from re-export duties of 6 million tons of Russian oil. The respective payments were included in the Russian budget as a fixed amount. It was 24.6 billion roubles or approximately 460 million dollars at the exchange rate for the first half of 2018. So these price fluctuations need adjusting. It means the Russian Ministry of Finance is less than happy about the current state of play. The ministry is way of increasing budgetary losses in the name of fulfilling its obligations towards its ally.

Another, even more serious problem was baked into the agreement. Both sides ignored the issue of supplies of Russian oil products to the Belarusian market. So, Belarusian oil product imports increased by 49.4% during the first six months of this year. This amounted to nearly 2.1 million tons worth 0.8 billion dollars.

According to Russia’s negotiators, these volumes far exceeded Belarusian market demand. and hence were mainly re-exported as petroleum products following minimal refinery in Belarus. Consequently, export duties supplement the Belarusian budget. And they generate corresponding losses for the Russian budget.

Prior volumes of oil imports from Russia have also been assessed as excessive by the Russian ministries. For example, on September 5, the Director of the Tax and Customs Policy Department at the Ministry of Finance of the Russian Federation, Alexei Sazanov, issued a statement. Due to oil supplies to Belarus, the Russian budget was short of export duties to the tune of 10 billion roubles in 2017 and 10 billion roubles during the first six months of 2018. Moscow went as far as threatening to demand reimbursement of the budgetary losses. According to the Russian side, volume of duty-free supplies cannot exceed 300 thousand tons a year. A cap suggested to match the level of Belarusian domestic demand.

For re-export duties, under the Russian budget this provides for the transfer of export duties to the amount of 26.2 billion roubles. That is, less than 400 million dollars at today’s exchange rate.

This is unfolding against the backdrop of the fiscal reform of the oil industry. This reform is being implemented by Russia. It means Belarus is to receive pricier oil, while the level of re-export duties will decrease. According to the Belarusian Ministry of Finance, this will lead to budgetary losses of 300 million dollars in 2019 alone. The Belarusian party believes it should be compensated for these losses.

The outcome of the negotiations

The August Sochi negotiations had the same outcome as previous talks. Namelsmallestminimum number of decisions and the greatest degree of uncertainty. The Russian party refused to comment on the results of the talks. They also abstained from participation in traditional press-conferences.

According to the statements made by Lukashenko and his government, some of the agenda items show a positive turn.

In particular, Russia dropped claims about benefits Belarus enjoyed due to oil re-export duties. The same went for similar claims about the refinery of Russian petroleum products. Presumably, Moscow agreed to renew transfers of duties on the re-export of oil to the Belarusian budget exceeding the prior agreed amount. In return, Belarus has agreed to abandon any sense of its entitlement to a larger discount on Russian gas.

Moreover, Russia is going to supply Belarus with oil in the volume required to fill the full refining capacity of the country. However, exact figures remain unknown. Earlier, the Russian party declared that it planned to define Belarus’ demand for oil based on the expert opinion of the Ministry of Energy. The ministry was to compare actual demand with volumes cited by Belarusian companies.

Belarus also attempted to settle some other issues.

Rosselkhosnadzor (the Russian veterinary and phytosanitary supervision authority) used to block exports of Belarusian dairy and meat products into the Russian market. It was agreed that access to the Russian market would be restored. Belarus would supply all the remaining volumes in 2018. In 2019, Russia will increase the purchased volumes of dairy products by 2% and meat — by 11%. This is partly a result of a shortage in the availability of such produce in Russia (including milk powder). Still, the implementation of this agreement will depend on the discretion of the respective ministries. There will be further inspections and other circumstances, so the provisions cannot be regarded as binding.

No decisions were reached as regards issues such as freight. The same goes for cooperation with manufacturing, a uniform visa regime. Nor is there now more clarity on Belarusian-Russian border rules for citizens of third countries.

The Kremlin has a problem

The gradual withdrawal of Russian support is nothing new in Belarusian-Russian relations. Yet, its current stage is special for several reasons.

To whit, the Belarusian leadership has accepted the irreversibility of this process. Its officials are now striving to diversify external economic relations. Reform of the Belarusian economy is on the agenda. Following the resignation of a liberal government in August 2018, Lukashenko appointed an even more youthful and open-minded Council of Ministers. (Liberal is still a relative term here.) The new Council of Ministers perceives the development of a more open economy as the second most pressing priority. (Second only to the resolution of the debt problem). Paradoxically, pressure exerted by Russia is an important stimulus that triggers reforms.

The ‘modernising’ role of Russia brings Belarus closer to meeting conditions set out by the International Monetary Fund for the launch of its credit programme.

Full discontinuation of housing and utility subsidies should be achieved by 2021, officials claim. Key public sector reform initiatives are underway. Notably the elimination of excessive employment or the introduction of elements of corporate governance. An agreement with the IMF could yield financial aid for Belarus. It could help diminish its dependency on Russian financial resources.

The diversification of oil supplies on the Belarusian market has its own peculiarities. An increase in oil prices and tax reform in the oil and gas sector in Russia mean the benefits of receiving Russian commodities diminish. So, Belarus is more open to other sources of commodity supply. If China does not cut Iranian oil imports despite U.S. sanctions, as was announced, we might be facing a situation where Minsk gains access to cheaper Iranian oil available on the global market (Minsk is already holding talks in this direction). In such a case, the diversification of oil supplies could seriously reduce Belarus’ dependency on Russia.

Since late 2018, a new stage in the Belarus-EU relations may begin. As stated by the EU Commissioner Johannes Khan, an agreement on partnership priorities with the EU could be signed by the end of the year. At the same time, the EU Delegation to Belarus declared its readiness to move forward with the signing of an agreement on simplified visa procedures between Belarus and the EU. The European Bank for Reconstruction and Development has also significantly enlarged its portfolio in Belarus. Not only does closer EU-Belarus cooperation provide Minsk with more resources and greater access to a huge market. It also gets China’s attention.

All these tendencies do not mean that Belarus has turned westwards. Nor does it point to its readiness to distance itself from Russia to such an extent as to question its involvement in integration processes in the post-Soviet space. But due to the unpredictability and instability of the Kremlin’s foreign policy, decreased dependency on Russia is a strategic priority for Minsk. Yet, neither the will nor resources exist to speed up any implementation in this regard.

The problem is that Russia sees Belarus’ relative success in the diversification of its economic ties as a threat. Economic stagnation, isolation and unpopular reforms leave Russia finding it harder to keep Belarus in its sphere of influence. Belarus no longer sees so much appeal in cooperation. So, as happened in the case of Ukraine in 2013, Russia is more inclined to put the brakes on this Belarusian pro-Western drift. And to do so through the use of force. That could in turn be marketed as a victory. A revival the dying ‘Crimean consensus’. The appointment of silovik Mikhail Babich as an ambassador to Belarus fits with this logic.

Lukashenko clearly does not want to suffer the sad fate of Victor Yanukovych. Hence, the stakes in the Belarusian-Russian game are high.