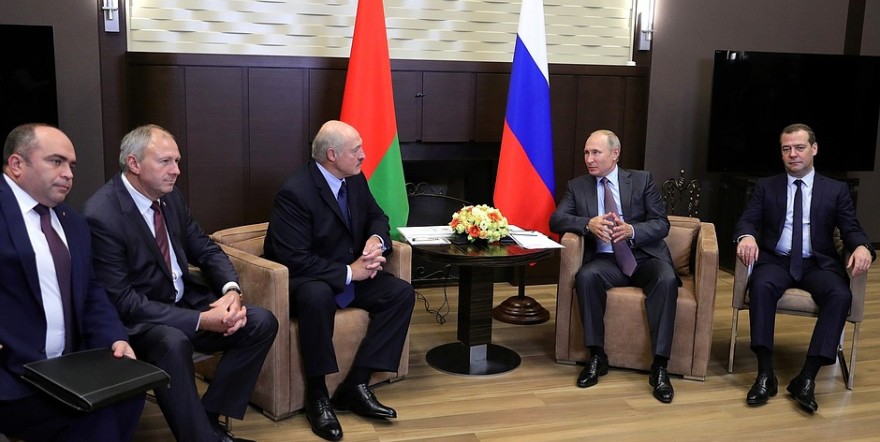 Numerous trade, financial and information conflicts between longtime allies Belarus and Russia came to what seems to be a very smooth resolution at bilateral summit on 12 October 2018. However, a more detailed look reveals that the October agreements are just a landmark in the controversial evolution of bilateral relations and the whole region

Summits and their outcomes

Over the last two months the President of Belarus Alexander Lukashenko and the President of Russia Vladimir Putin held three bilateral meetings: two in Sochi and one in the Belarusian city Mogilyov. They also failed to hold one more such meeting announced to take place on the sidelines of the Commonwealth of Independent States summit in Dushanbe on

The intensity of Belarus-Russia communications over recent weeks mirrors the intensity of contradictions that haunted the bilateral relations from the summer of 2016, but in particular — from late spring of 2018.

Back in 2016 Belarusian Government requested a revision of the price for imported Russian natural gas. The transportation expenses in the price formula were nominated in U.S. dollars and after two major devaluations of the Russian ruble (in late 2014 and 2015) their share in the price rose disproportionately. Moscow rejected the idea of revision of the price after which Minsk unilaterally reduced it. The Kremlin retaliated by cutting oil supplies to Belarus — a painful blow to the country’s finances. After a series of mutual accusations and hostile movements the two parties agreed on a resolution of the matter in Saint Petersburg in April 2017.

According to the agreements signed, Belarus would pay the high price for the gas, receiving only a minor discount. But to compensate the financial loss Belarus would at the same time receive duties from 6 million tons of exported Russian oil annually. This arrangement was designed to be effective till the end of 2019 when a new round of talks would define the new terms of further cooperation in the energy sphere.

In 2018 the issue arose again. As the global oil prices skyrocketed, the amount of export duties that Belarus was receiving rose respectively which was recognized as unacceptable financial loss by the Russian government. Besides, Belarus became a re-export hub for the Russian dark oil products — the residuals of oil processing (such as fuel oil, naphtha, gas oil) that met no demand in the Russian market and were exported to international markets via Belarus (with minor processing or without it). This also generated lost profit for the Russian government as the export duties for those oil products went to the Belarusian budget.

These two questions formed the core of the agenda for the August-October 2018 Belarus-Russia summits. It was complemented by several other issues: refinancing Belarus’ debt to Russia, ensuring unimpeded access of Belarus-produced dairy and meat products to the Russian market, regulating the crossing of the Belarus-Russia border by third-party nationals and some others. Before those summits took place, Minsk saw a series of intensive information attacks (directed primarily through the Telegram social network) “leaking” fake news about the state of Alexander Lukashenko’s health, infighting in Belarusian establishment, Moscow’s harsh decisions regarding Belarus, etc.

Against the backdrop of this disinformation campaign the summits themselves and their outcomes appeared to be quite positive. Moscow reiterated its commitment to the April 2017 agreements confirming Belarus’ right to receive export duties for 6 million of Russia’s oil exports. The Russian party lifted the ban on dairy and meat products imports from five major Belarusian producers (although leaving intact restrictions on a couple dozen more). The quotas for food imports from Belarus for 2019 were increased to total some 3 billion USD of projected revenue. Moscow also agreed to refinance the Belarusian debt to Russia in 2019 by providing a 630 million USD loan (although Belarus asked for 1 billion USD to cover the debt to be repaid to the Eurasian Stability and Reconstruction Fund as well).

On the downside of it, the Russian authorities put an end to all oil product re-export schemes implemented in Belarus. They cut oil product exports tenfold so that only those needed for the internal consumption could reach the Belarusian market. This incurred a loss of some 400 million USD in export duties and profits of re-export businesses. Besides, Moscow ignored Minsk’s request for easing the terms of repayment of the loan that Belarus had taken to finance the construction of the Belarusian Nuclear Power Plant (built by Russia’s Rosatom). The terms of admission of Belarus’ dairy and meat products to the Russian market are also shaky. Russia’s Rosselkhoznador (Federal Service for Veterinary and Phytosanitary Surveillance) is notorious for imposing bans on food imports with little regard for the higher-level agreements. Other issues, like migration and border control, have not been resolved either.

All in all, the outcomes of August-October 2018 Belarus-Russia summits come down to further revision of the formula of bilateral relations. Belarus lost some million USD of annual “support” on behalf of Moscow and did not gain anything in return. Russia on the other hand unilaterally reduced its Belarus-related expenses for maintaining the integration frameworks in the Post-Soviet space which it uses as a means of consolidating its “sphere of influence”.

After Vladimir Putin left Minsk on 12 October 2018, another honored guest from Russia arrived — Patriarch Kirill. His mission was to hold the sitting of the Synod of the Russian Orthodox Church on the Belarusian soil (Belarus is part of the ROC’s “canonic territory” and its Orthodox Church is part of ROC). The Synod was to decide on its response to the decision of the Constantinople Patriarch granting autocephaly (independence) to the Ukrainian Orthodox Church.

Before the ROC Synod assembled in Minsk on 15 October, President Alexander Lukashenko met both Patriarch Kirill and the members of the Synod. Being aware that the Synod will decide to break off relations with the Constantinople Patriarchate, Lukashenko repeatedly underlined the inadmissibility of schism (raskol) in the Orthodox Church and lectured the ROC bishops on the importance of Belarus’ regional role as the donor of international stability and security. On the eve of Patriarch Kirill’s arrival to Belarus the state TV broadcasted in prime time a lengthy interview with ex-President of Ukraine Victor Yushchenko famous for his anti-Russian sentiment.

The ROC Synod unsurprisingly ignored Lukashenko’s position and announced on 15 October 2018 that it would break off relations with the Patriarchate of Constantinople. This decision has two important consequences.

First, it positions Belarus as Russia’s foothold for launching an offensive (albeit “spiritual”) against Ukraine and its church. Up to that moment Minsk had masterfully avoided being dragged into Russia’s anti-Ukraine and anti-EU policies and consistently reiterated Belarus’ regional role as the donor of stability and security and the neutral venue for negotiating the Ukraine crisis. The decision of ROC thus directly undermines strategic priorities of the country’s foreign policy.

Second, the decision of the Synod might have substantial negative consequences for religious life inside Belarus itself. The document revoked by the Constantinople Patriarchate, dated back to 1686, touches upon the territory of Belarus alongside with the territory of Ukraine. The decision made by Bartholomew I of Constantinople thus formally creates grounds for the creation of the Autocephalous Belarusian Orthodox Church.

Up to now there has not been much enthusiasm about autocephaly in Belarus, although some alleged proponents of it are quite influential in the Orthodox community and in society generally. But the self-isolationist trajectory that the evolution of the ROC is likely to take after the October 15 decision might quickly change the predominant sentiment. The bans on participating in sacraments in Athos (already imposed by the Moscow Patriarchate), in Jerusalem at the Holy Sepulcher (if Jerusalem Patriarchate does not break off relations with Constantinople) and in other Holy places might spark unrest among Belarusian clerics. While the reputation costs that ROC’s self-isolationist and confrontational policies will likely incur for the Belarusian state might also shift the priorities of the political leadership away from supporting the status quo.

Finally, the confusion caused by the Moscow — Constantinople split substantially politicizes intra-confessional and state-church relations. For the Belarusian Government who used to brag off its interconfessional and national peace this development is a serious risk. Especially, amid economic turmoil and in the wake of parliamentary and presidential elections that are to take place no later than the third quarter of 2020.

As recent developments show, Russia is actively reducing the “maintenance costs” of the integration frameworks in the Post-Soviet space as its foreign policy tool. But through its confrontational conduct in the international arena it also increases costs for participating in these frameworks for its partners in the region. Those costs are not purely reputational. They have negative consequences for the international position, economic opportunity and, most importantly, security and stability of Belarus and Russia’s other partners.

Generally, such redistribution of “integration burden” cannot trigger disintegration policies. This is due either to lack of alternatives (as in the case of Belarus that does not envisage the possibility of its accession to the European Union), or to Russia’s effective control of its partners (as in the case of Tajikistan where Moscow’s direct military presence outweighs Beijing’s huge economic and political influence). Russian leadership is aware of these limitations and uses them to push forward with more assertive policies in the near abroad.

The status quo might be changing as the post-Soviet space is quickly approaching a period of simultaneous political transition in Belarus and Kazakhstan. This moment presents an opportunity for the Russian leadership to enhance its leverage over its closest integration partners. Which explains Russia’s current active pressure on Belarus.

But the moment of transition also creates pre-conditions for the discontinuity of the policies of Belarus and Kazakhstan. With fewer commitments to the Russian party the new governments in those countries might assume a more critical and pragmatic stance on Eurasian integration. In case Russia unsuccessfully attempts to unilaterally influence transition there, such intervention could backfire and lead to alienation of its closest allies, at least, in political and military political terms. Such development would have a detrimental effect not only for diplomacy, but also for the Russian regime’s legitimacy inside the country. Especially as it approaches its own potential political transition in 2024.