Belarus: All about Lukashenka’s image 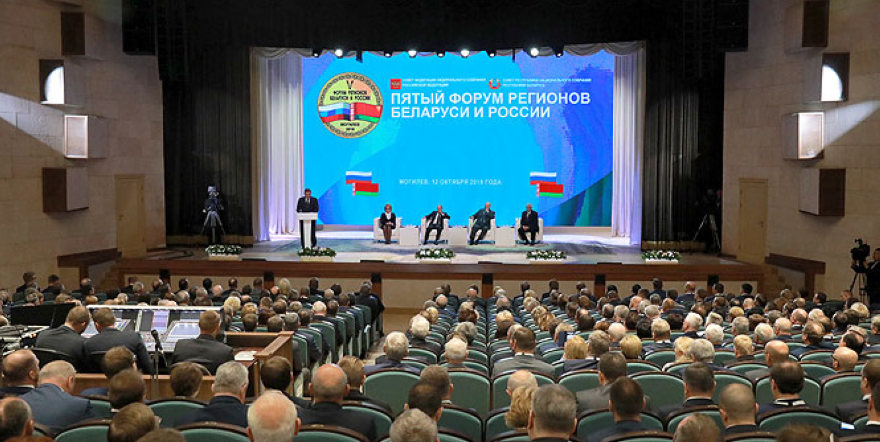 This latest period was notable for Belarus President Lukashenka’s active steps to “customize” the operations of his main “headquarters:” the Government for economic affairs and the Presidential Administration for political ones. The third HQ appears to be the Security Council, which at this time enjoys the most trust on the part of the president and is gaining the most positive marks for its efforts.

A meeting between the president and his premier, Syarhey Rumas was dedicated to determining and approving a Government Action Plan through 2019. The current program is basically built around the objective of running the next presidential election in the manner to which Belarus powers that be are accustomed. This means, first of all, no changes to electoral law and no amendments to related provisions in the Constitution. Second is the broad use of administrative leverage and financial and economic leverage to ensure the loyalty of voters. This approach relies mainly on the support of Lukashenka’s traditional electoral base, so it’s no surprise that the Belarus leader has made a point of emphasizing his goal of raising the incomes of pensioners and the poorest strata of the population, meaning those with less than 300 zaichiki—Belarus rubles—a month in wages.

Notable in this context is that the interactions between the president and his cabinet in the last few weeks have been presented in such a way as to emphasize Lukashenka’s leading role in all major policy decisions, but especially those of a socio-economic nature.

Yet another signal of the election campaign was an announcement by the Administration that it was ready to reconsider its position on the death penalty. Initially, the EU High Representative for Foreign Affairs and Security Policy and the Council of Europe’s Secretary General once again called on Belarus to institute a moratorium on the death penalty on October 9, the European and World Day Against the Death Penalty. In response, Belarus’s Permanent Representative to the UN in Geneva Yury Ambrazevich stated that Belarus was not prepared to rescind the capital punishment or to introduce a moratorium on it. Still, by the next day, Belarus’s chair of the Permanent Commission for Foreign Relations in the House of Representatives, Valery Voronetski, appeared before the PACE Committee for legal issues and human rights in Strasbourg and presented a very different position. He stated that an abrogation of the death penalty “could take place quite quickly.”

The last week of October saw the publication of the latest economic statistics, showing that inflation has picked up pace in Belarus. In September, it stood at 0.8%, down substantially from the 3.7% that was recorded at the beginning of the year. All told, the Belarus Government expects inflation to remain below 6%, even though more and more Belarusian consumers expect prices for goods and services to climb. This rise in inflation has so far not affected economic growth in the country, which remains relatively high, driven primarily by dynamic domestic trade.

The big economic news this quarter was debate over Belarus’s draft 2019 budget. At first glance, the main conclusion based on this document was the government’s decision not to have a snap election in 2018. This is particularly evident from the paltry level of funding in the budget bill for the Central Election and Referendum Commission—just over BYR 500,000, or US $250,000. However, this draft is an interim version presented by the Finance Ministry. Since calling an election and setting a date is exclusively the prerogative of President Lukashenka, and so far he has not made any decision, the absence of funding for an election campaign is quite understandable. The budget bill now has to go for vetting to the Presidential Administration, which can drag the process out until the end of 2018. This means that the mystery of Belarus’s election will likely be finally clear no sooner than the beginning of next year. The running of an election campaign in 2019 will indirectly lead to a significant rise in public spending to finance social benefits—funding for which comes 90% from local budgets.

Experts noted that the Strategy for the Development of Small and Medium Enterprises (SMEs), which was adopted recently for the period to 2030, proposes increasing the number of individuals engaged in SMEs to 2 million by the end date. As of this year, the number is 1.3 million. Given the fact that the overall size of Belarus’s labor force has been slowly shrinking, this means that there has to be a massive redistribution of workers between large enterprises, which are mainly state-owned, and SMEs, in favor of the latter. This means that the Government is working from the scenario in which it proposes shutting down a significant portion of large government enterprises.

Based on this, the Council of Ministers has been consistently presenting and carrying out propositions to simplify commercial activity and in general to liberalize the economic lives of Belarusians. For instance, at its last session on developing entrepreneurship, the discussion centered on adjusting the Tax Code and rules about property ownership.

A key event this quarter was the 5th Forum of the Regions of Belarus and Russia, which took place in Mogilev on October As observers had anticipated, this event was intended to define and clarify relations between the two countries in the energy, finance and commercial spheres at least through 2019. In addition, Moscow finally sent Minsk duties that it had arrested since July on October 11. These funds were supposed to have gone to Belarus under a “double-duty scheme” (when Belarus sells Russian oil, and credits custom duties to its own budget) involving 6 million tonnes of petroleum. A total of US $263mn in withheld fees was transferred and a guarantee made that such fees would in future be submitted in the regular course of work.

That same day the Russian Federation’s Government made a final decision to prohibit the export to Belarus of any petroleum products and LPG over and above what the country needed for domestic consumption, until the end of 2019. In this way, Moscow, as predicted, eliminated any options for Belarus to earn revenue on re-exports. The financial value of such schemes just for the first three quarters of 2018 brought Belarus US $1 billion. According to press reports, the Belarus side big businesses with close ties to Minsk were involved in the schemes. In short, Moscow not only sharply curtailed Belarus’s opportunities in the energy sector as a whole, but also gave a serious blow to the financial standing of those entrepreneurs who are the financial backers of the Minsk regime.

Another important event in bilateral relations was a joint session between the two countries’ defense ministries, which took place in Mink on October Russian DM Sergei Shoigu concentrated on NATO’s growing activity on Alliance’s eastern flank in his speech. The result was that Russia managed to put the maximum of effort into presenting a united front between the two partners in terms of understanding and reacting to security challenges in the region, effectively discrediting Belarus’s position as a contributor to regional security and stability.

Against the background of negative relations between Belarus and Russia, the First Forum of the Regions of Belarus and Ukraine took place in Gomel on October with the participation of both presidents. As official sources indicated, agreements worth US $100mn were signed at the forum. This forum also was politically and symbolically significant. The event allowed President Lukashenka to demonstrate his commitment to a “multi-vector” foreign policy approach, as well as his willingness and readiness to engage in independent policy, without looking to Moscow. For President Poroshenko, the forum demonstrated the closeness of relations between Ukraine and Belarus, and confirmed the rightness of the Ukrainian leader’s foreign policy in relation to his neighbor. It was also intended to boost his image among Russian-speaking Ukrainian voters through good relations with Lukashenka.