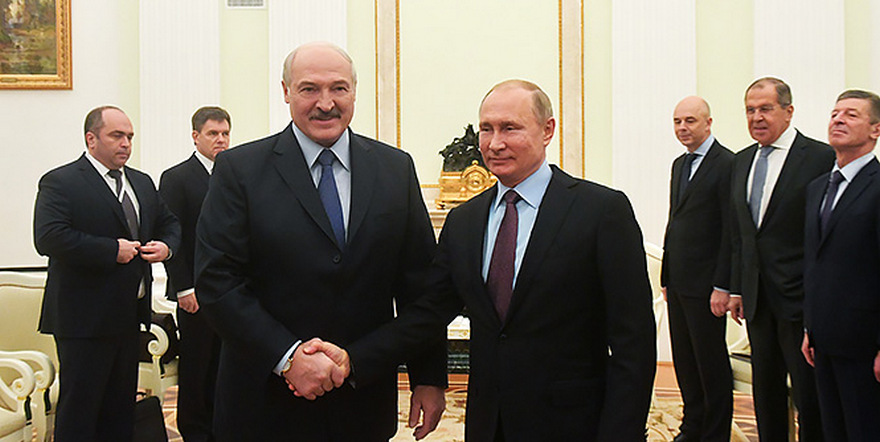 On December 6, Belarus President Aleksandr Lukashenko and Russian President Vladimir Putin had a loud dispute over the unfair price for Russian gas and transit rates through Belarus at the meeting of the Supreme Eurasian Economic Council in Saint Petersburg. President Lukashenko claimed that the Union State could not function in the context of inequality between partners and economic players in it. “No equal conditions, no union”, he said. Vladimir Putin responded that “this takes time and a different level of integration between our countries”.

Russia’s Vice Premier Dmitri Kozak took President Putin’s line when he voiced the Kremlin’s ultimatum in a harsher form on December 11. He refused to discuss discounts for gas and compensation of Minsk’s losses caused by the oil tax change with Belarus Vice Premier Igor Liashenko “until principled decisions on further integration of Russia and Belarus within the Union State” are reached. When the Union State Council of Ministers met in Brest on December 13, Russia’s Prime Minister Dmitri Medvedev stated that Russia was ready for further integration with Belarus within the boundaries established in the Union State Treaty of December 8, 1999.

Belarus President Lukashenko responded to this ultimatum by saying that sovereignty was sacred for Belarusand he would not surrender it for a barrel of oil. Moscow’s response to this statement was swift as Anton Siluanov, Russia’s First Vice Premier and Minister of Finance, said several hours later that Minsk should not count on compensation of it losses from the oil tax change (the assessment of Belarus’s direct loss caused by the change in the Russia’s tax code in 2019 stands at US $300mn).

The talks between Presidents Putin and Lukashenko on December 25 and 29 failed to resolve the disputes between the two countries. It looks like the Russian side just used them to voice its ultimatum yet again, and that ultimatum seems unacceptable to President Lukashenko. The only visible consequence of the talks is the decision to establish a working group with government representatives tasked with developing proposals on deeper integration and solving disputes. This is not the first time a group like this is set up. This time, however, Minsk’s strategy to talk itself out of it will hardly prove successful.

President Lukashenko called on the Belarusians to strengthen statehood in his New Year speech.

Independence and sovereignty above all

Minsk could not leave Russia’s harsh statements questioning Belarus’ sovereignty unanswered. President Lukashenko’s main message implied that the situation in Belarus economy would not be catastrophic even if no agreement was reached with Russia on the compensation of losses caused by the tax change. Belarus would be forced to change its domestic and foreign policy but would still develop as an independent state that makes its own choices on the vectors and priorities of development. At the same time, President Lukashenko demanded a switch to austerity in government spending and cut of any “non-productive” expenditures by government bodies, such as trips abroad to take part in conferences and similar costs.

This message served as a signal for other government players to speak on further relations with Russia. Aleksei Sytenkov, Deputy Head of the Pre-Trial Investigations Department at the Belarus State Border Committee, marked a 20% increase in the number of illegal migration crimes in one year. Russian citizens from the North Caucasus regions are most often perpetrators or accomplices in these crimes. Belarus law enforcement entities have long known about this. But they previously refrained from describing Russia as a source of criminality in Belarus, rather blaming it on western states.

Following the flag raising ceremony on December 20, Belarus Minister of Foreign Affairs Vladimir Makei spoke about independence and sovereignty of the Belarus State as an unconditional priority for Belarus and its citizens. Even though the price of sovereignty is high, every citizen must contribute to strengthening it. He bluntly referred to the MFA’s new raised flag as the “battle flag” signaling the decisive and principled position.

In the context of these developments, Belarus authorities have seriously embarked on restraining the spread of “satellites” from Russian operators, including NTV and Trikolor in Belarus. This is essentially a restriction of access for the Russian propaganda. Those who install the antennas are facing criminal cases. None of the companies has a license for the distribution of mass media products in Belarus, but private individual entrepreneurs and small companies used to provide services installing satellite antennas and subscribing clients. As a result, many people in Belarus have access to “uncensored” versions of Russian TV channels while the officially broadcast Russian TV channels reach the Belarus audience with a significantly curtailed part of their content.

Reforms as a response to Russia’s pressure

The escalating tensions in relations between Russia and Belarus have led to internal transformations in quite a few fields in Belarus politics. Apart from the change in the attitude of the Belarus leadership to Russia, these transformations mostly had to do with economic life. The board of the National Bank of Belarus has stated that the establishment of a unified mint for the union of Belarus and Russia is not currently discussed and can only be considered as the “helm of integration”. Pavel Kallaur, National Bank Board Chair, has spoken of a possible “crossover of inflation and devaluation processes” from Russia to Belarus. The Belarus authorities are thus preventively insuring themselves from economic difficulties in 2019 by preparing ground for blaming them on Russia.

The long-expected abolition of the decree on the campaign against fake entrepreneurial entities (No 488) came into effect on January 1, 2019. At the same time, the Chamber of Representatives at the Belarus National Assembly passed a package of amendments in the criminal code to decriminalize many economic violations or to introduce seriously lighter responsibility for them. The article on fake entrepreneurship was removed from the Criminal Code. The amended article on illegal entrepreneurial activity only entails punishment for unlicensed activity. Other important innovations include the narrowing down of the scope where general confiscation of property applies (special confiscation remains in place as a punishment for the property and the revenues received from criminal activity), and lighter criminal liability for the violations committed as part of legal economic activity.

The National Bank’s abolition of the authorization procedure for the opening of bank accounts for individualsabroad is another revolutionary measure. Belarus citizens can now open and use these accounts without the regulator’s approval.

2019 will thus see stronger comprehensive pressure from the Kremlin to force Belarus into a deep integration. Resistance against this pressure on the domestic and international arena will become the main element of Belarus’ politics. This will inevitably fuel escalation in relations with Russia.