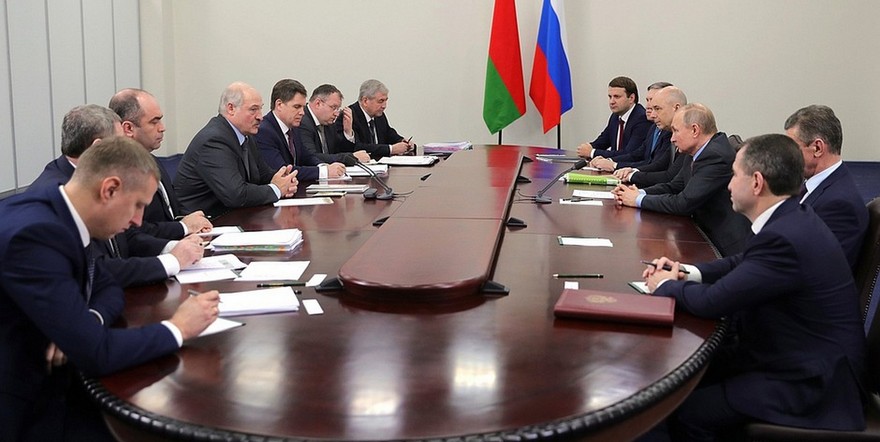 In  Russian President Vladimir Putin and his Belarusian counterpart Alexander Lukashenka met in Sochi for a not so friendly get together. It was obvious that the summit on the Black Sea offered merely a brief respite, rather than a great breakthrough, in the increasingly frosty relations between the two countries. March and early April were marked by a complete lack of progress on key issues in the bilateral agenda. Minsk’s only victory came in the form of a statement by the Russian authorities on the provision of the last tranche of funding of a loan worth $200 million from the Eurasian Fund for Stabilization and Development and an interstate refinancing loan to the tune of $600 million allowing Belarus to honour its financial obligations to Russia. Statements by the two countries’ leaders suggest that their countries had already agreed upon these steps in September 2018. Nevertheless, Belarus has yet to receive the promised funds.

The other issues at stake saw no noticeable progress. Although some Belarusian food industries regained their access to the Russian market, others faced even tighter restrictions; Rosselkhoznadzor (Russia’s state agricultural watchdog — ed.) imposed bans on the import of whole groups of Belarusian goods. At the same time, the recently announced criminal cases against Belarusians who are alleged of acting as smugglers in violation of these “sanctions” have now died down. If this is Moscow’s attempt at a detente, it may be disappointed; Minsk is seemingly determined not to make concessions on these issues. After all, Russian citizens’ names increasingly appear in reports by Belarusian law enforcement regarding the seizure of large amounts of prohibited substances. In another telling move, a man who had fought for an illegal separatist armed unit in the Donbas was recently deported back to Ukraine by the Belarusian authorities. All is not well between Russia and its last ally to the West.

These “sanctions” were one of several topics mentioned in a series of heated reciprocal statements made in March by the Belarusian Ministry of Foreign Affairs and Mikhail Babich, Russia’s ambassador to Minsk. The intense public activity shown by Babich, who is also a member of Russia’s Security Council and a part-time special representative of the Russian president, has started to irritate the Belarusian authorities. In his terse comments on statements made by the Belarusian leadership, stressing their lack of accuracy and far-fetched claims, the ambassador gave additional arguments in support of Russia’s position. Such behaviour was a stark contrast from that of his predecessor Alexander Surikov, who was always highly complimentary towards Minsk.

The Belarusian Foreign Ministry, which referred to Babich in its official statements as a “bookkeeper” and a “promising accountant,” was certainly irritated by the ambassador’s comments. But the Belarusian authorities were far more alarmed by Babich’s involvement in the country’s domestic politics. Not only did Babich continue Russia’s traditional engagement with local pro-Russian organisations, and with redoubled enthusiasm; it emerged in March that the ambassador had also met with the leadership of Tell The Truth (a Belarusian civil society movement whose co-chairperson Tatsiana Karatkevich ran as a presidential candidate in 2015 — ed.) and the economist Yaroslav Romanchuk. After his meeting with the Russian ambassador, Romanchuk made several pro-Russian comments when discussing the state of relations between Belarus and Russia. Meanwhile, the council of leaders of Tell the Truth announced that the movement opposed the postponement of the campaigning period for Belarus’s forthcoming elections. The news came as something of a stab in the back for the Belarusian leadership. Holding elections as soon as 2020 as the “default” schedule suggests would place the Kremlin at a great advantage, given that the economic situation in Belarus largely depends on decisions taken in Moscow. Such a move would therefore grant Russia additional opportunities to influence the course and result of the vote.

From Restraint to Retaliation

Importantly, Lukashenka at first tried to distance himself from the “Russian issue” in general, and the heated controversy between the Foreign Ministry and the Russian ambassador in particular. However, on April 11 he had to address the topic. In the course of a meeting with the Council of Ministers, Lukashenka complained about the trade restrictions imposed by the Russian authorities against Belarus (which he called “sanctions.”) According to the president, the Belarusian side constantly faces harassment and humiliation; a situation that Minsk is no longer prepared to tolerate.

As a “retaliatory measure” Lukashenka proposed that his government launch a major renovation of oil pipelines and other infrastructure which pass through Belarusian territory and are used by Russia to export oil and gas to the West. According to Belarusian officials, Minsk had earlier postponed these necessary repairs so as to not interrupt with Russia’s exports. But now that the Russians are behaving “ungratefully,” the Belarusians are free to do as they please without considering Moscow’s interests. In other words, Lukashenka actually threatened Moscow with blocking an oil pipeline through which 50 million tonnes of Russian oil exports flow westwards every year.

This high profile move was preceded by a government decision to immediately increase the fee it charged for the transit of Russian oil through Belarusian territory by 23%. Such a large price hike was clearly designed to compensate for losses from tax revenue (usually Belarus increases the transit fee by no more than per year.) Predictably, the Russians reacted very negatively. Transneft (Russia’s state owned oil transport monopoly — ed.) tabled discussions on the issue with the governments of both countries. And then Lukashenka made his comments before the Council of Ministers.

The harsh language and pointed threats emanating from Minsk were no surprise to the Kremlin. Russia’s presidential spokesman Dmitry Peskov declared that Russia had implemented no such “sanctions” against Belarus and called for a more constructive tone in bilateral relations. Representatives of Transneft offered to assist the Belarusian side to find a method of repairing the pipelines which would not interrupt the transit of oil through the country.

The speediness of Moscow’s reaction to Lukashenka’s declarations and threats testifies to the Kremlin’s preparedness for a new deterioration in relations. The acts of the Russian ambassador and of Rosselkhoznadzor tell much the same story; both provoked emotional reactions from the Belarusian leadership, providing them with even more grounds for dissatisfaction with Moscow’s policies.

Since the end of 2015, the Russian leadership has taken a series of unilateral steps consistently aimed at narrowing the room for manoeuvre available to the Belarusian authorities. These are part of a broader strategy to force Minsk’s subservience to Moscow’s foreign and defence policy. Consequently, from 2016 to 2018 the Kremlin gradually reduced the amount of subsidies and discounts available to Belarus. As a result of these actions and internal restrictions, Belarus’s economic growth in 2018 did not reach the projected 3.5%. According to international agencies, the country’s growth will not exceed 2%.

This state of affairs gives the Russian side a clear upper hand for realising its strategic interests and priorities over Belarus. The Belarusian side, meanwhile, does not appear able to muster a strong response to Moscow. For example, when it came to Babich’s inappropriate interventions into domestic politics, Minsk’s reaction was to publish a dossier about Russian intelligence officers the ambassador had brought to work with him in the Belarusian capital. Instead of harming Babich’s team, the publication instead revealed the Belarusian authorities’ unwillingness to take more decisive actions (such as expelling Russian diplomats.) Minsk presumably feared being perceived as the main initiator of a high-profile public conflict.

The situation with pipeline transport is very similar. Minsk’s threat to disrupt the transit flows of oil and other hydrocarbon products through Belarusian territory is fraught with risks; Moscow could put up a tougher fight than expected, while European confidence in Belarus could also decline. The Kremlin has taken great efforts to convince the Europeans of the futility of supporting Belarus as a means of bypassing Moscow. The current situation just goes to show that Belarus’s struggle for its sovereignty (which is simultaneously the struggle of the Lukashenka regime for its own survival) is fraught with risks for the European energy market. The prospect of any upheavals to the energy market particularly frightens Germany and other countries in the region, a fact which will not work to Minsk’s advantage.

Much the same is true of Russia’s military facilities in Belarus, as well as other strategic stakes in the game. On the one hand, the Belarusian leadership is no longer able to jeopardise any of the Kremlin’s more significant interests in the country without suffering more significant losses itself. On the other hand, it is also very difficult for Minsk to sit quietly and accept ever larger financial losses due to economic pressure from Moscow. Quite predictably, all that is left for the Belarusian leadership is to tighten the screws at home in an attempt to consolidate the existing regime.

The stability of the Lukashenka regime is propped up by the country’s large, if economically inefficient, state owned enterprises. The destructive logic of a permanent anti-corruption campaign underpins social order. Meanwhile, the regime’s attempts to rely on its traditional electorate are complicated by the fact that most of them have not yet recovered from the fall from what were already low standards of living in  Maintaining all these pillars of support requires a massive influx of financial resources, usually from outside. And since there are no other sources of external funding open to the Belarusian regime, the leadership in Minsk is forced to turn towards Moscow to obtain them. Minsk isn’t interested in *increasing* the financial support at this stage, because it knows this is impossible, but rather in maintaining the same level of funding or at least a slower rate of its reduction. However, the Kremlin will not accept such conditions.

By striking at the economic foundations of the regime and putting Lukashenka’s power in doubt, the Russian leadership has done something very important: paved the way for a divergence of interests between the Belarusian government (and groups with an interest in the regime’s survival) and Belarusian society. Moreover, the Kremlin is well prepared for any sudden movements Minsk may take to preserve the regime and strengthen the foundations of its support. Moscow has considered the risks involved by either side ratcheting up tensions and finds the costs acceptable; it has numerous means of pushing its agenda in Belarus and is ready to put them to use.

Therefore, the only way Lukashenka can escape the vicious logic of “reflexive control” is by making a choice. He will have to choose what he is prepared to lose: the sovereignty of Belarus, or sovereignty in the form he has become accustomed to in recent years. If he choses the second, he will have to change the logic of his regime and launch an early political transition under his personal guidance. He will have to supplement the regime’s reliance on administrative power and public obedience with a greater ability to build support through public consensus, creating a wider space for entrepreneurial initiative while continuing a sensible and cautious economic policy.

It is possible that Lukashenka may not have the stomach for such a bold move. Neither might Belarus as a whole, lacking professional administrators, loyal managers, or simply money. In any case, of course, the Kremlin will seek to use the implemented reforms to its own advantage. Nonetheless, the other scenarios open to the Belarusian leadership are more likely to lead the regime down a path of rapid collapse, with far more serious and unpredictable consequences.