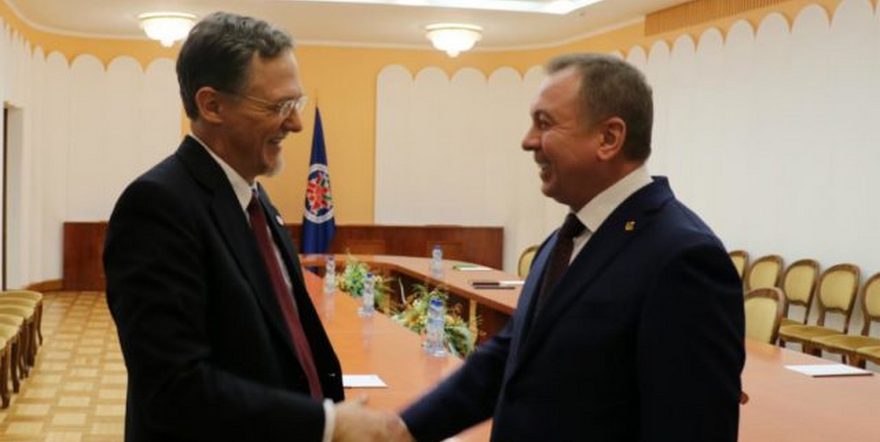 Following predictions by Russian military intelligence (GRU) that the West wants to separate Belarus from Russia and incorporate it into the Western orbit (see EDM, February 22), Moscow’s civilian external spyagency, the Foreign Intelligence Service (SVR), expressed its own concerns about the ongoing normalization in diplomatic ties between Belarus and the West. And pointedly, the SVR appears to closely echo the GRU’s assessments.

On July 9, the director of the SVR, Sergey Naryshkin, paid a working visit to Brest, Belarus, at the invitation of the head of the Belarusian State Security Committee (KGB), Valery Vakulchik. The two intelligence officials discussed the results of past cooperation and prospects for future collaboration between their special services. They also emphasized the importance of consolidating efforts aimed at strengthening their capacity to counter global challenges as well asthreats to the security of the Union State of Belarus and Russia (Svr.gov.ru, July 9).

Among the priority topics of the meeting, they discussed countering religious and political extremism, international terrorism and the spreading influence of radical organizations. But according to Naryshkin, the event was also notably devoted to the perceived problem of attempts by Western countries and their intelligence services to aggressively interfere in the internal affairs of Belarus and Russia. In response to that “absolutely unacceptable interference,” he claimed the SVR and KGB are building a “special defense” to protect the sovereignty and democratic freedoms of the two countries and their citizens (Belarus Segodnya, July 9). However, as Naryshkin spoke to reporters, his Belarusian counterpart, KGB Chief Vakulchik, remained conspicuously silent, thus signaling that Minsk may not in fact subscribe to those same views—especially within the context of ongoing Belarusian-Western normalization.

The SVR-KGB consultations in Brest coincided with another important visit to Minsk: the arrival, on the same day, of US Deputy Assistant Secretary of State George Kent. Subsequently, on July 10, Kent met with Foreign Minister Vladimir Makei to discuss a range of issues on the bilateral agenda, as well as prospects for further development of US-Belarusian relations (By.usembassy.gov, July 10).

In light of the Deputy Assistant Secretary’s visit, it is no accident that SVR Director Naryshkinused the talks in Brest to make extensive anti-American public statements. According to him, a group of Western countries—above all, the United States—cannot accept the formation of a new world order other than the one that was built by Washington in the 1990s—one that he views as based on aggressive US hegemony. Naryshkin believes that Western countries are very concerned about the formation of new centers of power, one of which is the Eurasian Economic Union, wherein Russia and Belarus play a defining role. Naryshkin also asserted that Western countries are concerned about the Russia-Belarus Union State’s functional successes (Belarus Segodnya, July 9).

Naryskin’s comments in Brest were a continuation of the remarks he made on June 20, in Ufa, during an international meeting of high representatives overseeing security issues. Specifically, the SVR chief alleged Western interference in the domestic affairs of other countries, ascribing to the West efforts to employ “hybrid war” and spark “color revolutions.” According to Naryshkin, on the territory of a target state, different network structures (public, artistic, scientific, religious, nationalist, etc.) are created or developed. They have horizontal organizations and retain significant independence from the state. He argued that these artificial networks are assigned the task of gathering data on actual and “smoldering” conflicts, contradictions between groups, as well as acute social and economic problems. Moreover, these same networks are then used by outside powers to impact the situation in the host country and, if necessary, to commence various destructive processes. He emphasized that any event can serve as a trigger: the disruption of a peaceful demonstration, as in Libya and Syria; the death of an “ordinary person” in the crowd, as in Greece and Tunisia; or electoral “machinations,” as in Georgia and Ukraine (Svr.gov.ru, June 20).

The Russian Foreign Intelligence Service head further asserted that, at a proper moment, the protest waves spreading through the network are synchronized. The old political system collapses under the burden of multiple challenges, and a new faction is brought to power. The same controlled channels are used to implant a new model of conduct into the public conscience. All of this is accompanied by a wide-scale propaganda campaign in the world media, intended to convince the population of the lack of an alternative to the current course of events as well as to justify possible foreign interference should it becomes necessary. One of the most illustrative examples of the realization of such a scenario can be seen in Venezuela, according to the Russian intelligence chief (Svr.gov.ru, June 20).

Commenting on Naryskin’s visit to Belarus, Lev Korolkov, an SVR veteran and an expert on crisis situations, claimed that Western intelligence services (from the US and various European countries, including, in particular the Baltic States) were working to turn Russia and Belarus against one another. Such subversive activity, Korolkov claimed, has been going on for a long time. According to him, the West exacerbates the disagreements in the economic sphere between Minsk and Moscow, taking advantage of the fact that the Union State has not yet been fully formed. Russian-Belarusian relations are being destroyed not only by the special services but also various supposedly humanitarian-oriented non-profit organizations (NGO)—such as the US Agency for International Development (USAID), among others—which Korolkov characterizes as subversive structures (Rubaltic.ru, July 10).

These SVR analyses are squarely in line with the 2019 GRU strategic assessment on Belarus. And together, these appraisals demonstrate the Kremlin’s mounting concerns about Russia’s ability to maintaining Belarus within its geopolitical sphere of influence (see EDM, February 22). Despite its biased and unsubstantiated character, however, the SVR and GRU’s (surprisingly complementary) consensus on Belarus indicates not only Russia’s strategic phobia of losing influence over Belarus but also confirms that Belarus still occupies a priority position on the Kremlin’s agenda as a potential crisis point. And if the military-political leadership in Moscow shares this SVR-GRU assessment, then, undoubtedly, the Russian intelligence community has already been tasked with developing various contingency plans for Belarus—thus justifying the Kremlin’s potential “preventive interference” in Belarusian domestic affairs (See EDM, March 4).