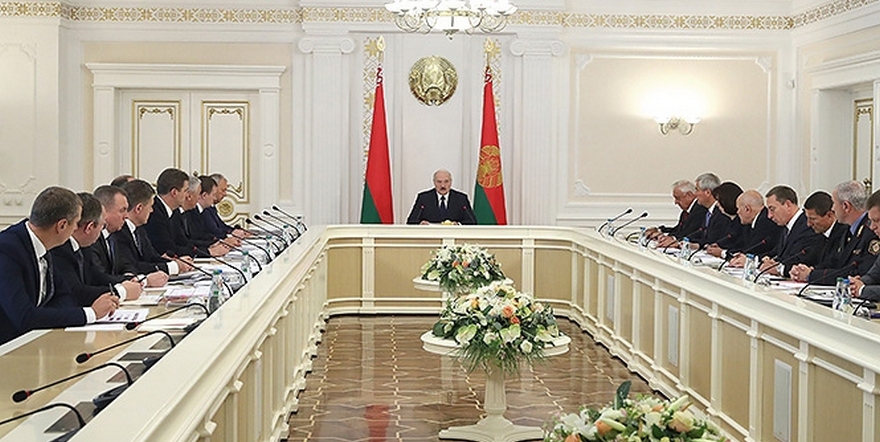 Parliamentary elections are finally scheduled in Belarus. While the government is walking away from populistic rhetoric in its struggle for the hearts of the voters, nobody expects the parliamentary election to deliver systemic change. Without such transformations, the economy will not solve its chronic problems. Solving landmark issues in foreign policy is put off till later.

Preparations for the parliamentary election

Belarusian President Aleksandr Lukashenko demonstrated record-breaking activities in public space all summer, focusing on two key issues that define the stability of the political regime: the state of affairs in the law enforcement and security bloc and the election campaign.

Central Election Commission Chair Lidia Yermoshyna confirmed once again that August 30, 2020 is the fitting date for the presidential election. She mentioned that she was not familiar with specific proposals on the constitutional reform in Belarus. She endorsed the introduction of the mixed election system to boost the work of parties in Belarus. Most parties, as well as Za Svobodu (For Freedom) movement and Speak the Truth bloc, have already announced their intention to run in the parliamentary election. In other words, the government will not face the problem of election boycott in the coming year.

For now, however, the impression is that the parliamentary campaign will be run under a conservative scenario, while Belarusian authorities are openly cold-shouldering expectations of election liberalization by Western capitals. The authorities expect to have two thirds of the current MPs in the new parliament. The share of women is likely to increase in the legislature. No serious changes are expected in the composition of the parties.

The number of candidates from the parties loyal to the government, including the Republic Labor and Justice Party, the Liberal Democratic Party and the Communist Party of Belarus, is likely to increase thanks to the easier nomination procedure. Still, the overall competition is likely to match that of 2016 with around 500 candidates. At least one of the two alternative candidates (Alena Anisim) is expected to get into the Chamber of Representatives in the new parliament, and several independent MPs with a technocratic profile without serious political ambitions will probably join the new parliament, too.

The authorities have opted for the mobilization scenario for the election campaign next year. Their primary target to mobilize will be the traditional electorate, including pensioners and people in the countryside and small towns.

The “crushing” meeting of A. Lukashenko with the law enforcement segment on the quality of crime detection and investigation was aimed at creating “election PR” for him, including by shaping the core of support among entrepreneurs. In practical terms, the key goal is to strengthen the work of law enforcement authorities, primarily for the benefit of the Presidential Administration, and to make law enforcers less autonomous. The Investigation Committee, the Ministry of Internal Affairs and Prosecutor General’s Office found themselves under fire of criticism. The Operative Analytical Center under the President and the State Security Committee were publicly designated as “supervisors” over the law enforcement authorities. At the same time, there is no discussion of systemic reforms yet. Some decisions regarding appointments can be taken in the near future.

International financial institutions forecast a slowdown of Belarusian economy in the coming years. In its report, the World Bank worsened economic outlook for Belarus for the coming years once again: its GDP will grow 1.8% in 2019, 1.3% in 2020 and 1.2% in 2021. The key reasons for this decline include low growth of productivity as a result of structural inflexibility of Belarus economy and worse external conditions (stagnation in traditional markets for Belarusian processing and agricultural industries). The increase of government debt largely denominated in foreign currencies and uncertainty about compensation of losses caused by Russia’s oil tax change, as well as about bilateral trade relations, create risks for the country’s economic development.

Lukashenko’s meeting with the leadership of the Council of Ministers on August 2 resulted in the publication of the government’s plans to ensure moderate economic growth and income of the population in 2020. The President unexpectedly did not use the opportunity to make the usual populistic declarations and criticize the government. It is not entirely clear whether this is a stable trend, but the rejection of populistic rhetoric may signal a serious shift towards cooperation with international financial institutions and to the new economic rhetoric in the context of the upcoming election campaign.

The National Bank leadership also confirmed plans to adopt a deficit budget. It insists that this move will not raise doubts about macroeconomic stability or lead to increased inflation.

Talking away talks on deeper integration with Russia

As expected, the meeting of Belarus and Russia prime-ministers on June 21 did not deliver practical results in terms of “deeper integration within the Union State”. Despite many declarations about the process of talks, the parties failed to reach an understanding on the key issues on the agenda and postponed the discussion to November 2019 between heads of states. Belarus-Russia top level talks of July led to yet another rescheduling of the deadline from November to December 2019. Prime-ministers are expected to approve the action plan on deeper integration in early September and presidents of the two countries will consider it in December. The action plan contains the principle of “two states — one market” and does not have any political points. According to the action plan, government agencies will have to draft 28 action plans on different sectors of the economy in the future.

The deadline for negotiations allows Belarus to conduct November parliamentary election in a “calm” atmosphere. But it raises the stakes at December talks: gas prices will remain among unresolved issues until then. The Russian side only announced that Belarus-Russia relations would not remain within the status quo after the current stage of negotiations (until November-December 2019) — they will either deepen or degrade. It is obvious, however, that Belarusian approach in the integration talks is all about talking away the process and refusing to take any additional commitments without solving current problems first. Moreover, the adoption of this program will not solve the root conflicts in the Belarus-Russia relations: the problem of extending discounts for Russian fuels for Belarus.

In the relatively quiet background of Belarus-Russia relations, preparations for the Union Shield 2019 drills between Belarus and Russia have started. The drill will take place from September the field near Mulino, a town in Nizhniy Novgorod Oblast, Russia. The location deep in Russia was chosen in order to avoid raising tensions in Europe. Yet, this will hardly have a de-escalation effect given the matching timeframes of Union Shield 2019 and Russia’s Center 2019 strategic maneuvers. Quite on the contrary, a serious risk exists that foreign observers will see them as elements of one strategic concept. In practice, the Belarusian side is not engaged in preparations, planning or participation in the Center 2019 maneuvers. The Union Shield 2019 plans to engage nearly 12,000 of personnel, up to 950 combat equipment and up to 70 airplanes and helicopters. Belarus will send over 4,000 of personnel, over 30 tanks, 80 armored carriers, nearly 50 reactive missile systems, devices and mine launchers, as well as 15 airplanes and helicopters.