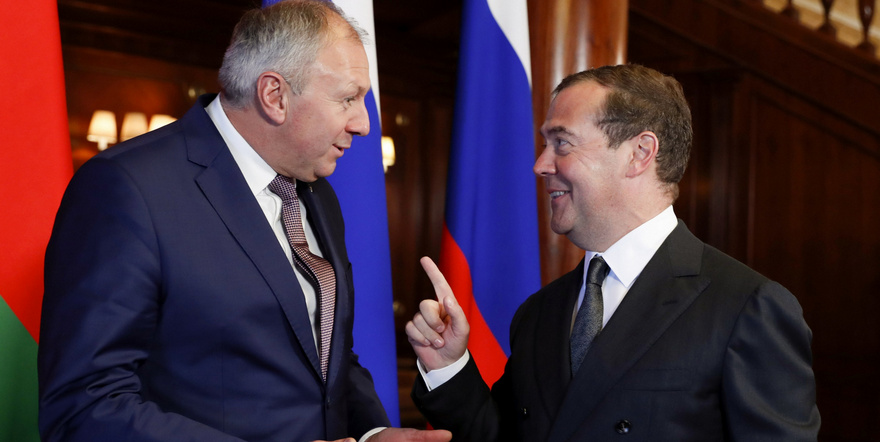 Over the past couple of weeks, events in Belarusian-Russian relations have been developing at an unprecedented rate. On September 6, the prime ministers of both countries initialed the draft Program of Action of The Republic of Belarus and The Russian Federation for the Implementation of the Treaty on the Creation of The Union State — in other words, the project to “deepening integration” between Belarus and Russia. Although the Belarusian Prime Minister, Sergei Rumas, promised to publish the text of the document after its initialing, the Belarusian government later “changed its mind” and stated that the text would not be published in order to avoid “speculation” and “distorted perceptions” of integration processes in Belarusian society.

However, the Russian newspaper Kommersant was ahead of Minsk: having gained access to the text of the Program of Action, published an entire article written by its deputy editor-in-chief. It stated that the degree of integration provided for in the “Program of Action” exceeds the scope of integration within the EU and essentially means the creation of a confederation, and possibly even a federal state. To be sure, these far-reaching conclusions are not entirely supported by the text discussed, although, of course, the creation of a single Tax Code and a common industrial policy, as well as a single regulator of the energy market, are extremely ambitious goals.

The Kommersant article provoked a sharp reaction in Belarus, where information on the progress of negotiations for “deepening integration” is severely lacking. The assumptions and conclusions of the deputy editor-in-chief of the newspaper were accepted by many journalists and experts at face value, and subsequently, the theory that Lukashenko was surrendering independence in exchange for renewed subsidies from Russia proliferated.

On September 19, OfficeLife Media, a Ukrainian-based publication, published information received from an alleged insider stating that the roadmaps that should have been included in the Program of Action, amounting to 31 pieces, are being developed as top secret documents. This information, of course, does not correspond to reality, since there are not enough people in the Belarusian departments involved in the process who have access to top secret materials in order to work simultaneously on 31 roadmaps. While it is possible that one or two of the 31 roadmaps are being developed in secret, this type of work is not classified, generally speaking.

On the same day, the Belarusian embassy in Russia’s response to an inquiry from a Belarusian citizen was published on social and digital media. The latter was surprised by a strange announcement of a Russian dance show stating that dancers from “the whole country” from “Vladivostok to Minsk” gathered for the event. The Belarusian Embassy responded by stating that Belarusians and Russians are building “one country — the Union State”, and that therefore there was nothing strange in this wording.

Belarusian society reacted as uncomfortably to the last two news events as it did to the Kommersant article.

In the background of all this, several high-ranking Western officials visited Belarus; US National Security Advisor John Bolton (now fired), US Deputy Secretary of State David Hale, the new head of the EU Delegation to Belarus, Dirk Schuebel, and Lukashenko himself signed an agreement on visa facilitation with the EU. Additionally, Belarus is actively seeking alternative sources of energy (in Kazakhstan, Azerbaijan and the United States, at the very least) and is strengthening military cooperation with China.

Seeing this chain of events, a logical question arises: what is going on in Belarusian-Russian relations? Is Lukashenko “giving up” Belarus’s independence? And if so, what does he expect to receive in return?

Moscow is moving to the next level, while Minsk lags behind

In reality, what Minsk is doing is nothing fundamentally new. Belarus is continuing to seek resources to expand its strategic autonomy in its relations with Russia, reaffirm guarantees that Belarus will not be exploited for Russia’s foreign policy interest, and cement its political dominance within the country ahead of parliamentary elections during a rather hectic period.

In terms of integration, Minsk hopes that Belarusian officials will write in the right provisions to protect Belarus’s sovereignty on the 31st roadmap, thanks to which they would be able to sign the Program of Action in November or December without jeopardizing neither Belarusian independence nor their own dominant position within the country. That is why they limited access to information about the contents of the Program. There is no point in exciting people before an election, as it were, if all the nuances are written in the road maps still in development, which provide for sovereign equality and preservation of the sovereignty of both sides. That is the essence of what the Belarusian Minister of Economy, Dmitry Krutoy’s stated in his response to a corresponding request by the deputy Elena Anisim.

However, Minsk’s chosen policy of ‘non-disclosure’ puts the ball in the Kremlin’s court in publicizing the ongoing work on “deepening integration”. The Russian authorities are much less sensitive to the secrecy of the Program of Action, and to the integration process as a whole, which is why they actively use Minsk’s silence to increase tension. So even as it has been fighting for economic integration, the Belarusian government is losing a completely different battle for the control of the information agenda and political influence that comes with it.

On Moscow’s side, the transition to a more active policy of playing with the Belarusian government through a game with “deepening integration” is a qualitatively new stage in pressure on Minsk. Moreover, Moscow’s goal is not to deepen bilateral integration in its current form on the basis of the principle of sovereign equality. The point is to change the very nature of integration, to replace the principle of sovereign equality with the asymmetric dependence of Belarus on Russia by establishing complete unilateral military-strategic control over the territory of Belarus. Moscow obviously knows that Belarus will not agree to such an approach (and Minsk has already said so repeatedly), which is why they are playing a game to decide things unilaterally — by provoking destabilization and turning Russia into a security provider for Belarus.

At the current stage, this process can be called an attempt to “Ukrainize” Belarus and “Yanukovychize” Lukashenko. Moscow used a combination of intimidation, threats of sanctions and positive financial incentives to dissuade Yanukovych from signing an association agreement with the EU in November 2013. Now they are using public and non-public forms of pressure and promises of financial injections to drag Lukashenko into signing the “Program of Action to Deepen Integration”.

A step like signing the Program of Action during the parliamentary elections, under Moscow’s informational domination, will surely lead to a sharp surge in protest activity. And from here on lies a direct road toward strengthening internal repression and disappointment from the European Union and the United States in the upcoming parliamentary elections in Belarus. This in turn will lead to a breakdown of the agreements reached between Minsk and its Western partners over the past few months.

As a “maximum agenda”, Belarus’s general destabilization and Russia’s transformation into its main provider of stability and security, along with Moscow’s liquidation of its strategic autonomy, are all on the table. This scenario will allow the Kremlin to turn Belarus into its Western military-strategic bridgehead, which has been Russia’s ultimate goal since at least 2015, when it pushed the issue of installing a military base in Belarus.

Bearing in mind the Russian-Ukrainian agreements of December 2013, it can be assumed that Moscow could indeed allocate serious money to Minsk in exchange for signing the Program of Action, and even transfer part of this money. The Yanukovych government at one time managed to get 3 of the promised 15 billion dollars from the Kremlin. However, it is unlikely that the Belarusian government will be able to use this money to stabilize the socio-political situation in Belarus.

It isn’t just about “deepening integration”. Are surprises to be expected at the elections?

There is a serious danger in Moscow’s transition to more decisive action against Minsk.

Belarus continues to assert its sovereignty, adhering to a multi-vector foreign policy and seeking to develop relations with its Western partners. And since the government is committed to such a foreign policy, it cannot fully realize that public accusations of betraying the national interests and sovereignty of the country will be taken seriously, as the result of both the failed information policy of the government itself and the Kremlin’s own effective information operations. The Belarusian government’s silence on integration issues, interrupted only by assurances of continued sovereignty without any objective information about the process, enhances the effect of the Kremlin’s information operations. Minsk is clearly not keeping pace with the development of events.

Moreover, just as the authorities are confident that it is impossible to seriously doubt their commitment to protecting the sovereignty of Belarus, they are also confident in their control of the political situation ahead of the elections. And on both issues, they are greatly mistaken. Their unpreparedness to confront the Kremlin’s information pressure on the foreign policy field is fully consistent with their unpreparedness for any serious upheavals or challenges on the domestic political level. And such surprises seem quite possible.

The fact is that, in sociological terms, the current situation in Belarus checks many boxes for an “unexpected” development of events, known as the Brexit Effect, to potentially occur. The Brexit Effect refers to political actors harnessing the political potential of population groups who feel ‘left behind’ as a result of economic and social transformations of recent years. The political actors in question can be either “random” populists, elite groups, or external political players.

The possible signing of the “Program of Action for Deepening Integration” could potentially agitate not only the nationalist circles in Belarusian society, but also other social groups ahead of the election campaign to stand up to the government. This could take the shape of environmental protests (including in connection with the planned opening of a Belarusian nuclear power plant in October), anti-war protests (in connection with the reform of the draft system, which so far have clearly not fully unfolded), economic protests, protests against the exploitation of administrative resources in parliamentary elections, and others. On the other hand, pro-Russian citizens — who remain the majority in Belarus, judging by the latest available polls — may turn their backs on the authorities if a full-fledged confrontation with Moscow arises. It is seriously doubtful whether Belarus is prepared for this kind of protest activity, especially if it is supported by the Kremlin. But of course, there is time yet for Minsk to strategize.