The Russian media in Belarus 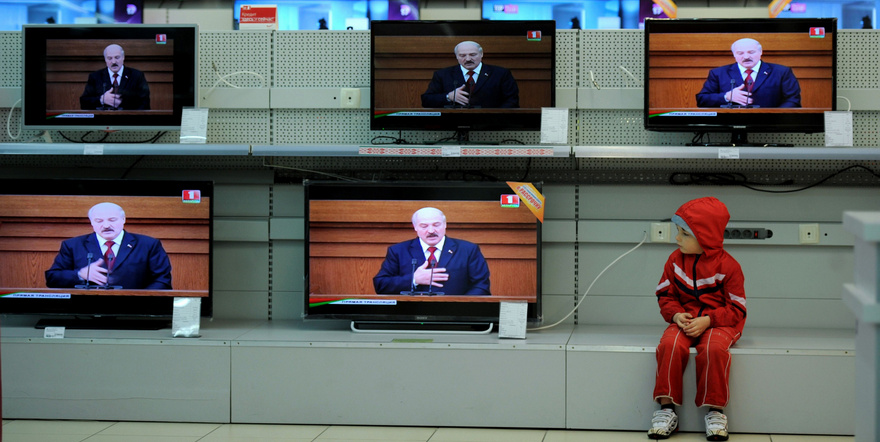 Part six in the series ‘Russian Media: Moscow and Beyond Calling’: Russia’s information influence on Belarus

There are common trends shared by the Belarusian and Russian media spaces. Internet sources have become more popular (especially among young audiences) in recent years; the popularity of traditional media has been gradually declining. 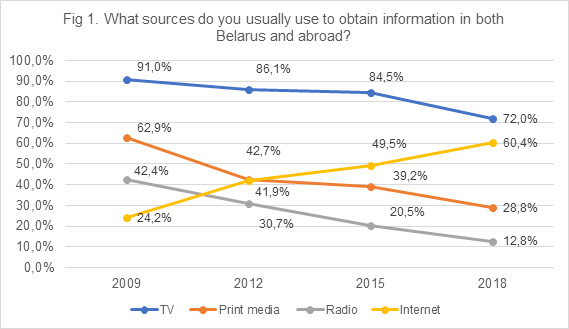 As can be seen, the radio audience has plummeted over the last decade. It makes up only 12.8% of the population. Radio is seen as a source of reliable information on current events mainly among citizens over 60 (19.1%). Significantly, online media (19.1%) are equally popular among this age group. We will focus on TV, print and online.

Television has been the main channel of Russian media influence on the Belarusian audience since the 1990s. In the past, Russian TV channels broadcasted to Belarus directly. Now, their work is organised through editorial boards located in Minsk. They hire Belarusian journalists, producers and directors, who determine editorial policy independently from Moscow but in cooperation with the Belarusian Presidential Administration

The Russia TV channel and NTV are available in their purest form as part of the publicly available package in Belarus (nine TV channels). The former has a localised Belarusian version, RTR Belarus, while the latter has NTV Belarus. The schedule is only slightly altered: for example, RTR Belarus also offers special releases of Belarusian news programmes.

The MIR television and radio company also broadcasts in Belarus in an almost unaltered form. Its TV content is also included in the public TV programme package.

Russian media content also forms the basis for several Belarusian TV channels. These include the ONT channel, which is most popular in Belarus. ONT uses the content of Channel One Russia and broadcasts the Vremya programme as half of its nightly newscast, followed by a Belarusian news block. STV, one of the three leading Belarusian TV channels, is based on the content of Russia’s REN TV. In fact, only channels owned by Belarus National State Broadcasting (Belarus-1, Belarus-2, Belarus-3 and Belarus-5) create their content independently from the Russian media.

At the same time, the Belarusian authorities are entitled to cut out programmes they do not like. They exercise this right only rarely, and only in the case of direct criticism by Russian television, which is almost non-existent. Propaganda programmes perceived by Minsk as less dangerous but still destructive are censored or moved to a later hour to reduce their audience. That happened, for example, to Vladimir Solovyov’s Duel and Evening with Vladimir Solovyov talk-shows. 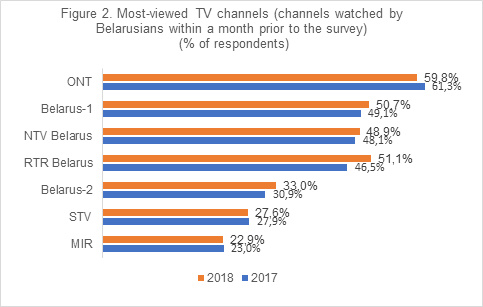 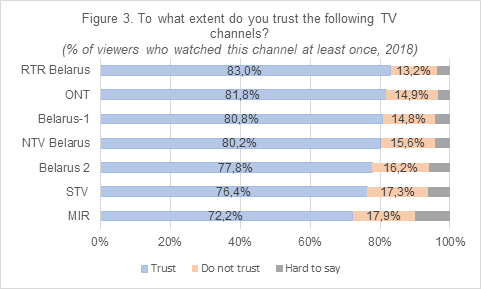 The establishment of the state-owned company ‘Television Advertising Alliance’ by the Second National TV channel (ONT), the National State TV and Radio Company of the Republic of Belarus (GTRK), Minsk TV and representatives of the MIR TV and radio company on a parity basis was an important event in the world of TV broadcasting. The company will be tasked with direct sales of TV commercials, bypassing intermediaries who took the lion’s share of revenues, impeding the development of Belarusian TV channels. Television Advertising Alliance is planning to sell advertising space on Belarus-1, Belarus-2, Belarus-3, Belarus-5, NTV Belarus, ONT, STV, Russia-Belarus and MIR starting January 1, 2020. Earlier, the market for TV commercials in Belarus was controlled by Russian company Video International, and since 2015 by Sergey Teterin and Leonid Mints, businessmen close to the Kremlin.

Print media and the Internet

Two Russian newspapers, Komsomolskaya Pravda and Arguments and Facts are distributed in Belarus based on the same rules as Russian TV channels, namely, the newspapers have Belarusian editorial boards. Russian content is accompanied by a main local page. The circulation is  copies of Komsomolskaya Pravda daily and 125,000 copies of Arguments and Facts in Belarus weekly. 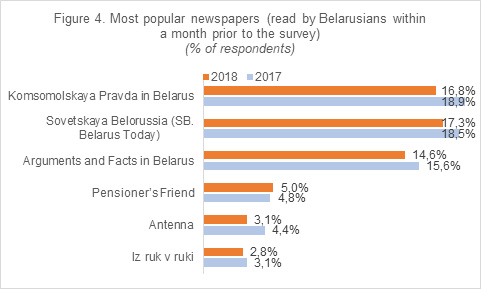 In terms of confidence in the media, Arguments and Facts in Belarus surpasses Belarusian state-owned print media. 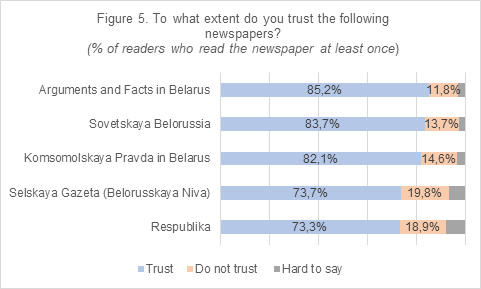 The Russian media have a strong sway on the preferences of Belarusian online users. According to a rating of Belarusian news website traffic as of November 2018, prepared by the Nasha Niva newspaper, the sites of Komsomolskaya Pravda in Belarus and Sputnik news agency are among the top 20 Belarusian media sites. Both websites are directly linked to Russia. According to the regular gemiusAudience media study, in September 2019, five of the top 12 websites in Belarus were Russian or Russia-related sites (including the localised version of Yandex). Moreover, the most popular social media are the Russian VKontakte and Odnoklassniki (Classmates) platforms, which are far ahead of Facebook (43.3%, 36.6% and 15.3%, respectively).

Since late 2015, Russian institutions have developed an active policy of launching regional Internet platforms mimicking authentic local websites. The phenomenon is studied by Belarusian researchers and journalists. According to Nasha Niva, in some cases, as in Homel, such platforms have managed to attract numbers of users comparable to those of regional state-owned Internet media.

Researchers and journalists have learned that the owners and authors behind the ‘new wave’ platforms are either citizens of Russia, or citizens of Belarus; both are sharing radically pro-Russian views, including Belarusians with far-right sentiments. Sources of funding remain largely unclear; this is likely to indicate unofficial funding by state-owned or state-controlled Russian sources.

These websites can split into two major groups. One (including sozh.info, berestje-news.org, vitbich.org, mogilew.by and 4esnok.by) is positioned as local or national Belarusian sites. And some of them indeed are Belarusian, although they are clearly associated with Russia due to their anti-Western and anti-nationalist narrative. An observer can only speculate about their deeper organisational and financial ties. For the sake of attracting traffic, they do not focus on political news; they offer varying amounts of such content. These websites often promote hate speech and elements of anti-Western ideology typical of Russian nationalism, such as discrimination against sexual minorities. They also participate in disinformation campaigns.

The other major group of websites (teleskop-by.org, ross-bel.ru, imperiyanews.ru and other sites including social media platforms) is openly pro-Russian. These sites promote an ideology of West-Russism (zapadnorusizm). This is the view that the Belarusian people do not constitute a separate nation; instead they form part of the ‘triune Russian people’. The sites also unmask ‘pro-Western agents’ in Belarus. And they criticise signs of Belarusian national identity and so on. On the whole, these sites fit the mainstream Russian nationalist narrative.

The Sputnik news agency is a special case. It operates via a Minsk office including a full editorial board and multimedia press centre. Sputnik is one of the most popular online media outlets in Belarus, second only to the largest platforms TUT.by and Onliner.by. Sputnik conducts a relatively moderate editorial policy, in line with the official position of the Kremlin and Russian MFA. Although it is an openly pro-Russian site, its campaigning in favour of rapprochement with Russia is not accompanied by radical anti-Belarusian statements.

To conclude, Russia will reinforce its presence in the Belarusian information space following the Belarusian authorities’ distancing the country from the Russian information space. It will adapt to align with the changing preferences of the Belarusian audience. In particular this means taking into account the growing popularity of Internet media. The focus is on a stronger presence on the Internet, opening niche sites including those targeted at local audiences, as well as enhanced activity on social media.

In September 2019, the Belarusian Analytical Workshop (BAW) published preliminary information indicating that this tactic is not as successful as the Kremlin might have expected. According to sociological surveys, pro-Russian sentiments in Belarus are fading. Based on the information collected during focus group interviews, BAW head Andrei Vardomatski concludes that anti-Belarusian comments in the Russian media lead to a further decline in their credibility and in fact reduce pro-Russian sentiments. Yet, the reliability of the data, as well as the nature and sociological scope of these changes, remains unclear.

Russia does not monopolise the Belarusian information space as strongly as  years ago. Still, its position is strong in the field of traditional media. Its online activity is aligned to changes in technologies and audience demands. Thus, Moscow’s potential to influence the Belarusian information space is large; Minsk’s readiness to withstand this influence in critical circumstances is unclear.

That is why a key role is played by the Belarusian authorities’ potential to use tough measures to ensure the regime’s stability. The latest evidence of this tendency is the most recent promotion of Lukashenko’s ‘bodyguards’. One example is the recent appointment of former Presidential Security Service officer Yuri Nazarenko as the chief of the internal troops of the Ministry of the Interior of Belarus.