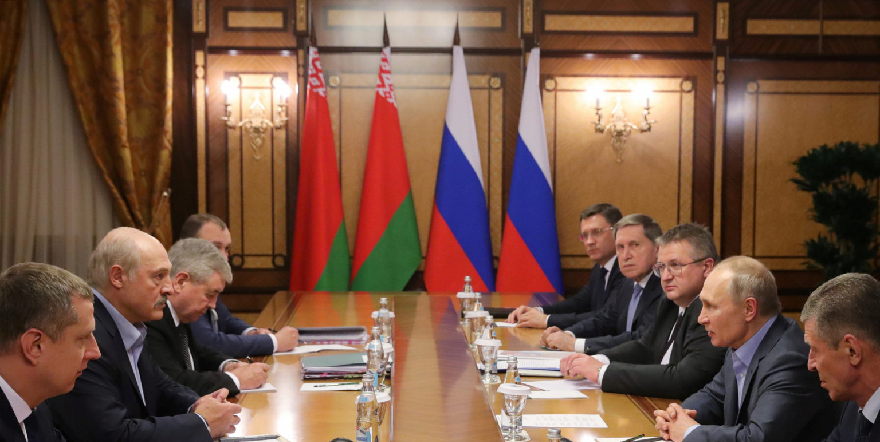 Integration related oil and gas rents dry up for Belarus

One of the policies consistently implemented by Russia in its relations with Belarus since late 2015 has been the reduction of integration related rents available to Minsk. That included most prominently the revision of the terms of cooperation in the oil and gas sector. The two partners’ differences on this remain the core driver of their ongoing mutual strategic estrangement.

The cooperation in the oil and gas sector was the main focus of the Lukashenko-Putin meeting on February 7. The only issue the parties agreed on in Sochi was the price of Russian natural gas for Belarus that would remain at 127 USD per 1000 cubic meters till the end of 2020. But even that came at huge cost to Belarus. Russia shut down the ‘customs clearance scheme’ in the oil sector that had compensated Belarus’s losses from the higher gas prices since April 2017. Respectively, Minsk lost out over 300 million USD in annual revenue in 2020 which essentially brought the price of the gas up from 110–110 USD (price minus compensation) to the current 127 USD per 1000 cubic meters (price without compensation). It was therefore no wonder that Lukashenko urged to amend the terms of the gas deal within just two weeks since the contract had been signed.

Against this backdrop the bilateral cooperation in the oil sector remains in an impasse. The Kremlin distanced itself from the negotiations leaving Minsk to deal with Russia’s individual oil suppliers. But their reluctance to work with Belarus might reflect the Kremlin’s political imperatives rather than the desire for higher profits.

As the result, Belarus is not buying oil from Russia’s ‘big five’ oil companies. It seeks oil from alternative sources (including Russian smaller oil companies) and sustains huge losses as that oil is more expensive and its refineries are severely underutilized. Russia is also feeling the pressure as the price for Urals oil is going down having increased its negative gap from the price for Brent oil from 0.2 to 2.8 USD even before the oil price meltdown of March 2020.

Despite mutual losses, both parties are reluctant to make concessions. The Belarusian leadership can never agree to the terms of ‘deeper integration’ that Russia is imposing on Belarus. Meanwhile the Kremlin is equally reluctant to make any concessions to Minsk. As Moscow seeks to undermine the functionality of the Belarusian state, it considers Minsk’s losses a win for itself and its own losses an acceptable price factored into its strategy.

Belarus’s dependence on the Russian market

Russia is the only major target market for numerous Belarusian industries. Major exports (worth over 100 million USD per year) with over 80% dependence on the Russian market included the following groups in 2019:

Other most significant exports (worth over 100 million USD per year) with over 50% dependence on the Russian target market include the following groups:

Overall there are only six major export industries with under 40% reliance on the Russian target market. But two of them depend heavily on the Russian raw materials and had been affected by the current crisis in bilateral relations already in 2019.

Russia’s trade restrictions: not so hard so far

Russia has repeatedly introduced trade restrictions to curb imports from Belarus, especially, during the period of strained relations between the two countries. The most significant of those episodes took place in the run up to 2010 presidential elections. Back then, according to Russian Newsweek, Lukashenko declined to fulfill his promise and sell several leading Belarusian dairy plants to the Russian companies. Besides, the Kremlin was hostile to Belarus because of Minsk’s reluctance to recognize the ‘independence’ of breakaway Abkhazia and South Ossetia back in 2008. Due to restrictions introduced in late 2008 and enforced in 2009 the export of Belarusian milk and dairy products dropped from 1.05 billion USD in 2008 to 0.86 billion USD in 2009.

The same happened in 2018. As Russia’s policy towards Belarus was driven by hardline approaches, Russia’s restrictions brought the export of milk and dairy products from 1.97 billion USD in 2017 to 1.60 billion USD in 2018. However, both times those import cuts were reversed soon after as the Russian producers were unable to fully substitute the supplies from Belarus.

After the onset of the Ukraine crisis Russia introduced ‘countersanctions’ against the EU states banning agricultural imports from them. Many EU exporters then used Belarus as a transit hub and transit jurisdiction to bypass those restrictions. Which pushed Russia to introduce restrictions to cut those sanctions busting schemes. For example, Belarus’s exports of apples, pears and quince to Russia reached a record high of 119 million USD in 2015, following the introduction of the ‘countersanctions’. As the Russian media reported, a big part of ‘Belarusian’ fruits came from Poland and Turkey. After a series of restrictive measures the export of those fruits from Belarus to Russia shrank to 53 million USD in 2018 and 37.7 million USD in 2019.

It should be mentioned, though, that Belarus’s role as a regional hub and gateway to the Russian market had been growing prior to the Ukraine crisis. For example, the aggregate export of fruits and nuts from Belarus to Russia grew threefold from 2012 till 2014 (from 56.3 million USD to 171.3 million USD) and added 28% more in 2015 to reach the record high of 219.9 million USD (was down to 110.7 million USD in 2019). The same was true for the export of fish and crustaceans, molluscs and other aquatic invertebrates that grew from 37.4 million USD in 2012 to the record high of 138.2 million USD in 2014 (down to 126.6 million USD in 2019). Therefore, Russia’s respective trade restrictions introduced against Belarus after 2015 did not only cut the sanctions dodging schemes, but dealt a wider blow to Belarus’s role as a logistics hub in the trade between the third parties and the Russian Federation.

The outlined statistics show that Russia possesses a huge leverage over Belarus. Moscow has a wide variety of opportunities for increasing the economic pressure on Belarus, undermining the work of specific sectors and enterprises. Given the poor state of finances of the state enterprises and lack of alternative employment opportunities in most regions of Belarus, even targeted niche disruptions of the work of specific sectors and enterprises could create localized crises and boost the protest sentiment of the population.

The fact that Russia has not made extensive use of this vast leverage over Belarus so far means that by and large the Belarusian leadership has been effective in using diplomacy and institutional tools pertinent to the regional integration frameworks to offset Russia’s full-scale economic crack-down on Belarus. Despite the introduction of trade restrictions and rising political differences between the two countries, the overall Belarusian exports to Russia have been steadily growing since the crisis year of 2015 from 10.4 billion USD to 13.6 billion USD in 2019. And that can be considered a prominent aggregate achievement of the Belarusian regime.

On the other hand, this also means that Belarus’s economic resilience has not been properly tested for a possible disruption of the economic cooperation with Russia yet. And although such disruption would have its costs for Moscow itself, it is not impossible that it opts for and economic crackdown on Belarus in order to achieve its strategic goals in the regions. This leaves the question open as to how prepared Belarus is for Russia’s possible harder restrictive policies in the mutual trade.