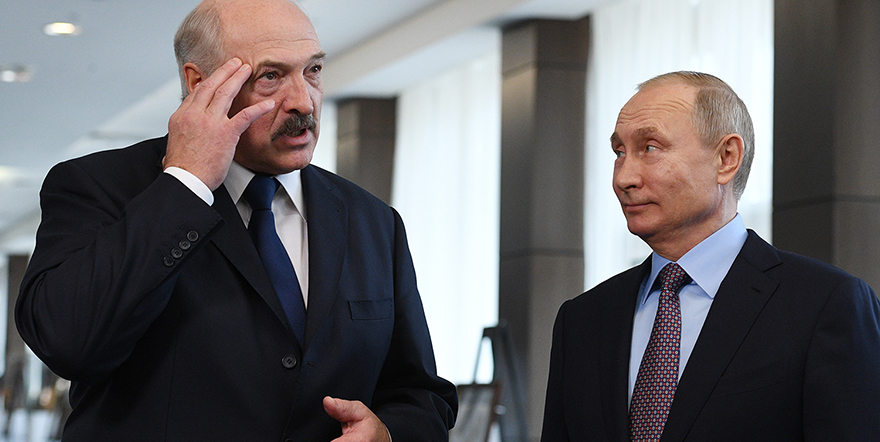 After Belarusian President Alyaksandr Lukashenka rejected the Kremlin’s so-called integration ultimatum at the end of 2019, and following Russian President Vladimir Putin’s announced constitutional changes, the following January, to effectively reset his presidential term tally to zero (see EDM, January 14, 16, March 16), some experts argued that a forced unification scenario between Belarus and Russia within the Union State had become significantly less likely. Ostensibly, this option became both less attractive and less necessary for the Kremlin. But in fact, the seeming pause in the Kremlin’s attempts to coerce Minsk into deeper integration was caused largely by the developing COVID-19 crisis; and in a post–coronavirus pandemic world, further Russian attacks on Belarus’s sovereignty and independence will be even more likely. They will be motivated by the complicated domestic political and economic environment in Russia, negative epidemiological and economic implications of the coronavirus crisis in Belarus, political tensions in the latter country stemming from this year’s presidential election campaign, and the West’s preoccupation with other crises or concerns, such as the confrontation between China and the United States, tensions within the Euro-Atlantic community, and so on.

First of all, the unification of Belarus with Russia within the Union State framework was never really conceived or pursued in order to allow Putin to retain power after 2024, when his second consecutive (though fourth, overall) presidential term expires (Emerging Europe, January 30). Rather, by continuing to push for deeper integration within the Union State, the Kremlin seeks to address the strategic question of maintaining Belarus within Russia’s geopolitical orbit. Attempts along these lines notably date back to 2015, when the Kremlin formulated several initiatives aimed at deepening political and military integration with Minsk (see Jamestown.org, March 2). Then as now, it was motivated by a phobia in Moscow of losing influence over its western neighbor and is pointedly reflected in recent strategic assessments of Belarus by the Russian leadership and intelligence community (see EDM, February 22, March 4, July 31, 2019).

Second, Moscow has neither revoked its integration ultimatum from two years ago nor excluded discussions of in-depth integration within the Union State from the bilateral agenda (Government.ru, May 27). Illustrative of these continued geopolitical ambitions on the part of Moscow, earlier this year, Russian media leaked details of the so-called “31st road map” on integration (RBC, March 18), which President Lukashenka openly rebuked as an attempt at absorption and incorporation of Belarus by Russia (ONT, February 14).

Third, the negative implications of the COVID-19 pandemic, oil price collapse and forthcoming global economic recession may push the Kremlin to act more aggressively, as was the case in 2008 (war with Georgia) and 2014 (war with Ukraine), during previous economic downturns (The Economist, January 16, 30, 2015). Indeed, as socio-economic, domestic and geopolitical processes put pressure on Russia, the Kremlin—lacking a viable anti-crisis strategy (see EDM, May 4, 18)—is likely to see foreign policy as the last available tool by which to reinforce its legitimacy. According to the Russia Public Opinion Research Center (VCIOM), President Vladimir Putin’s approval rating has fallen to the lowest point recorded in 14 years—27 percent (Wciom.ru, April 2020). The only available option left may be a demonstration of a new geopolitical success. But with multiplying constraints on its foreign policy beyond Russia’s immediate neighborhood (see EDM, May 26), the quasi-absorption of Belarus could serve this purpose quite well.

In recent months, Belarus came under a large-scale disinformation campaign from various Kremlin-connected Russian media and Telegram channels regarding the COVID-19 pandemic situation in the country (iSANS, March 31, April 15, May 21, 26); see EDM, March 24, April 14, May 12). The core narratives criticize Belarusian authorities for inaction and ignorance of the pandemic, which endangers not only the population of Belarus but also potentially neighboring countries, including Russia itself.

This propaganda campaign intends to undermine trust between Belarusian society and the authorities; moreover, it seeks to call into question Minsk’s reputation on the international stage. In terms of strategy and foreign policy, it justifies Russia’s intervention in the domestic affairs of Belarus in several key ways:

According to Moscow-based analyst Valery Solovey, a former MGiMO professor with alleged insider connections to the Kremlin, Moscow intends to use the COVID-19 pandemic to, at a minimum, put pressure on Minsk or, possibly, even topple the Lukashenka regime and establish unilateral control over Belarus. In an interview on Feygin Live, he claimed that Russia is going to resolve both the “Belarusian issue” and the “Ukrainian issue” with the use of force no later than by the end of 2020. One of the convenient pretexts will be the epidemiological situation, since both Belarus and Ukraine will face uncontrollable spread and peak of the coronavirus in late May–June. Solovey believes that a “humanitarian” intervention by “Russian brotherly military virologists” in Belarus (and Ukraine)—allegedly in response to demands of the local population—is highly likely, especially if Lukashenka himself contracts COVID-19 or become incapacitated for some other reason (YouTube, April 15).

At the same time, he argues, the distractions of the pandemic, the new global economic crisis, as well as internal problems will prevent Western countries from being able to restrain Russia from carrying out such an intervention in Ukraine and Belarus. In fact, the West will purportedly welcome such actions by Moscow since Belarus and Ukraine will be associated with humanitarian catastrophes (“plague house”) caused by the dramatic inaction of their authorities (YouTube, April 15). Although these arguments echo the above-described scenario of humanitarian intervention (scenario 2), in their content they actually suggest interference under the pretext of an unstable political situation (scenario 3) in Belarus (and Ukraine) in connection with a power vacuum.

The negative consequences of the COVID-19 pandemic (though surely not as damaging as predicted by professor Solovey) and the economic crisis in Belarus may jeopardize the country’s fragile political stability during the second half of the year, especially amid presidential elections, on August 9. Whether Moscow will try to exploit this instability to coerce Lukashenka to finally accept the integration ultimatum or topple him (or both) remains an open question. But there can be little doubt: the Kremlin will interfere.