Belarus Goes Nuclear. Context and Prospects of the Astravyets NPP 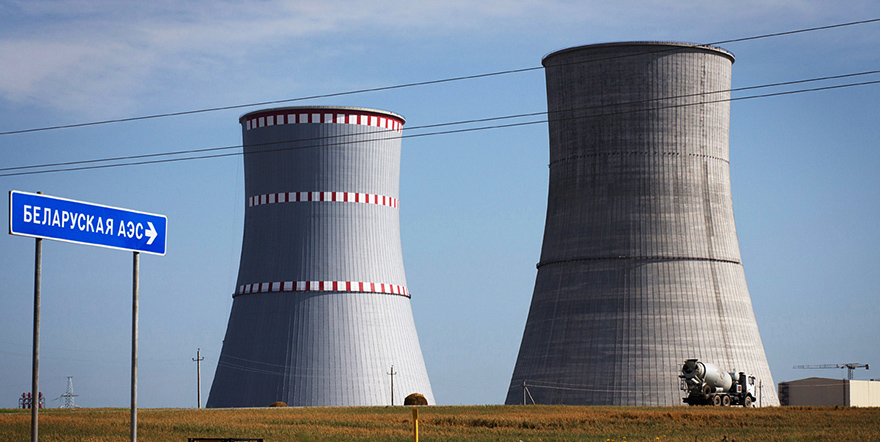 On 7 November 2020, the president of Belarus, Aleksander Lukashenko, visited the Astravyets Nuclear Power Plant (Astravyets NPP) and dubbed its pending commissioning a “historic moment” for Belarus. Despite several incidents during the tests in late 2020 and early 2021 that prompted shutdowns of the reactor, the first unit was reconnected to Belarus’s power grid at full nominal capacity on 21 January 2021. The Astravyets NPP launch took place amid the worst political crisis in the country’s history. Following a rigged presidential election in August 2020 and violent suppression of the ensuing protests, the Belarusian authorities found themselves lacking legitimacy domestically and facing mounting political and economic pressure internationally. These events, and the choices made in response to them, are reshaping the geopolitical and geoeconomic context in which the plant will operate and thus are affecting the prospects of the entire project.

From an asset to a liability

From its very start, the Astravyets NPP project has been geopolitically and economically rather equivocal. Driven by the Belarusian government’s desire to fill the energy export niche vacated by the shutdown of the Ignalina NPP in Lithuania, it came to influence regional dynamics and the development of Belarus itself in various ways.

The project has substantially increased the debt burden on the Belarusian economy, which will affect its development for years to come. It was financed by an intergovernmental loan from Russia to cover 90% of costs (with a $10 billion limit) and an additional loan (with a $500 million limit) granted to Minsk via Russia’s VEB bank. By late 2020, Minsk had used about $4.5 billion of those funds.

The plant’s commissioning was postponed due to several setbacks during construction. As a result, the Russian leadership eventually agreed to Belarus’s request to ease the terms of the loan. According to the new protocol, Belarus can extend the period of the loan use until the end of 2022 and replace the current “mixed” interest rate for the loan with a fixed rate of 3.3% per annum. It can also postpone the starting date of repayment of the principal debt on the loan from 1 April 2021 to 1 April 2023.1

Despite this concession on Moscow’s behalf (which still leaves the Astravyets NPP project financially attractive for the Russian party), the debt related to the plant will remain a heavy burden on the Belarusian economy. According to the estimates, under new terms, Belarus will have to pay out $7.927 billion until 2037 alone. This is a heavy load on the country’s already strained finances.2

The financial implications of the Astravyets NPP project go hand in hand with its political and geopolitical fallout. Due to the questionable choice of the project’s location (close to the border with Lithuania and to its capital, Vilnius), as well as the overall lack of transparency in the work of respective Belarusian and Russian agencies, Lithuania has become a strong and consistent opponent of the project. Its fierce opposition to the Astravyets NPP played a crucial role in forging the EU’s consolidated stance on supporting Baltic synchronisation with the Continental European Network (CEN) and, with less success so far, blocking the imports of energy produced by the Astravyets NPP.3 Vilnius has struggled and finally managed to make the Astravyets NPP project a crucial part of the Belarus-EU bilateral agenda, essentially freezing progress on core issues of that agenda (like the Partnership Priorities document, the comprehensive partnership and cooperation agreement and, for some time, the visa facilitation agreement), making it conditional on Minsk’s concessions on the Astravyets NPP project.

Thus, the geopolitical effects of the Astravyets NPP project were compounded by the economic effects, as they blocked any opportunities for Minsk to profit from exporting electricity from the Astravyets NPP to the EU market and imposed additional costs on Belarus by further weakening Belarus-EU relations. Belarus has no markets for the Astravyets NPP electricity apart from its own and those of the Russian Federation/Eurasian Economic Union. Ukraine’s market is currently available and, as of early 2021, consumes some 4 million kWh per day. But Kyiv plans to integrate its energy system with European markets and continue to minimise its energy import from Belarus and/or Russia (as it did in 2020).4

The prospects for Astravyets NPP electricity in the Russian market do not look promising either. The price in Russia’s day-ahead market in Europe (as of early 2021) has been between €13.41–16.67 for 1 MWh, while the break-even price for energy from the Astravyets NPP is no less than €35 for 1 MWh.5 Belarusian access to Russia’s capacity allocation market could improve the situation, but this issue requires major regulatory changes in Belarus and has not even been properly discussed by the parties so far.

The domestic use of Astravyets NPP electricity is also fraught with substantial difficulties. The country’s energy system is not ready to consume additional amounts of electric energy. The Belarusian government’s programme for developing the country’s energy system until 2025 envisions measures to increase the domestic demand for electricity. The implementation of those measures would cost another €3.5 billion.6 But even if implemented, this programme would only increase the consumption by some 4.5 billion kWh, whereas the generating capacity would increase by 18 billion kWh.7 Moreover, domestic consumption provides limited returns due to low household income level and subsidized tariffs.

The political crisis of 2020 in Belarus has drastically changed the regional landscape. From a reliable partner and self-proclaimed donor of regional stability and security, Belarus has turned into a major source of political and geopolitical risks. It has lost its domestic stability, entered a confrontation with all its neighbours and been sanctioned by the EU, the UK, Canada, the US and several other states. The crisis helped Lithuania to secure greater support in Brussels for its uncompromising stance on electricity imports from Belarus. Those developments have substantially exacerbated the aforementioned challenges faced by the Astravyets NPP project and have increased Moscow’s leverage over Belarus.

The Kremlin, in the meantime, has been rearranging its relationships with various postSoviet states into more cost-efficient, Russiadominated alliances that enable and facilitate Moscow’s freedom of action rather than limiting and constraining it.8 Belarus has been and remains one of the main directions of this rearrangement. Following Lukashenko’s refusal to accept Russia’s “deepening integration” Belarus has no markets for the Astravyets NPP electricity apart from its own and those of the Russian Federation The crisis helped Lithuania to secure greater support in Brussels for its uncompromising stance on electricity imports from Belarus 3 ultimatum, the Russian leadership seems to have committed itself to replacing the Belarusian leader, decentralising the Belarusian political system and establishing Russia’s strong presence in the country’s domestic politics via one or more Moscow-controlled political parties that would dominate Belarus’s parliament.9

Lukashenko’s resolve to hang on to power, the loyalty of his security agencies and the threat of wider US and EU sanctions in case of Russia’s open and direct intervention in Belarus limited the scope and interim outcomes of Moscow’s activities in Belarus. However, Russia’s priorities and intentions regarding Belarus remain unchanged. And given the poor overall performance of the Belarusian leadership, Moscow is now in a better position than ever before to exploit the domestic political crisis and achieve its strategic goals in Belarus.

As Lukashenko’s main goal is to stay in power, he finds the option of giving in to Russia’s demands as unacceptable as he finds the option of mending ties with the EU unrealistic. This dictates an isolationist foreign policy and a repressive domestic policy. But Minsk lacks the resources necessary to implement such a policy in the time left in Lukashenko’s current presidential term (which ends in 2025). Therefore, the domestic and foreign policy choices made by Lukashenko, as well as his overall ability to retain power in the months to come, are an important variable that would affect the regional dynamics around the Astravyets NPP project.

Lukashenko’s continued survival as the president of Belarus would present all actors in the region with some difficult choices. Russia would have to decide whether to employ other (riskier) instruments to oust Lukashenko or to tolerate him and let the burden of pressuring Minsk economically fall on the EU. Brussels would have to decide whether it is ready to maintain and increase its pressure on Minsk and bear the costs of that pressure without any prospect of economic or political return from this involvement. Lukashenko himself would have to opt either for Belarus’s long-term isolation with increasing (and increasingly unbearable) costs (his most likely choice) or for the country’s reengagement with the EU and US, which would be conditional on his leaving office and completing an orderly transition of power in Belarus.

If Lukashenko negotiates a transfer of power in Belarus and a new rapprochement with the EU under a new administration in Minsk takes place, Belarus’s engagement with the EU, its transparency in the Astravyets NPP project and the ultimate admission of Astravyets NPP electricity to the EU market (without technologically jeopardising the Baltic synchronisation project) would benefit all involved parties. For Belarus, such a positive prospect is the only way to avoid an economic catastrophe conditioned in no small measure by the heavy burden of the costs related to the Astravyets NPP. But given the currently skyrocketing political and geopolitical risks in the region and with a trench-warfare approach increasingly taking root (especially in Minsk), the likelihood of such a positive scenario is close to nonexistent.

In the most likely scenario, in which Minsk remains isolated and hostile, its actions would push the Baltic states and the EU generally to pursue a comprehensive energy import ban on Belarus as well as ever-widening sanctions, including sectoral economic sanctions. These actions would accentuate the geopolitical divides in the region, leaving Belarus with everdiminishing foreign policy choices that would ultimately allow Russia to assert full control over Belarus, with the Astravyets NPP becoming an integral part of its energy market and foreign policy. For Lithuania and other Baltic states as well as the EU, addressing the safety risks or geopolitical and geoeconomic threats emanating from the Astravyets NPP would then involve dealing directly with Russia and its foreign policy dynamics rather than just with the energy policy ambitions and miscalculations of an indebted regime in Minsk.

6 Council of Ministers of the Republic of Belarus, “Mezhotraslevoy kompleks mer po uvelicheniyu potrebleniya elektroenergii do 2025 goda” [Intersectoral set of measures on increasing consumption of electricity until 2025], Decree No. 260, Pravo.by, 25 April 2019.